Well, here we go. It’s taken quite a while, but now everything’s back in order. Episode 8 is released and further episodes are in the making too. For now let’s just check the horribly punny eighth episode.

If you don’t recognize the girls sitting in the audience, then go and watch Sayonara Zetsubo Sensei right now (it’s written by the same guy as Joshiraku). Actually in the Joshiraku manga, every rakugo scene has some cameo appearances in the audience, while in the anime they just put the same guys all the time. Seeing the SZS girls is kinda refreshing. From right to left: Komori Kiri, Oura Kanako, Kobushi Abiru, Sekiutsu Maria Tarou, Fuura Kafuka, Kitsu Chiri and Otonashi Meru. 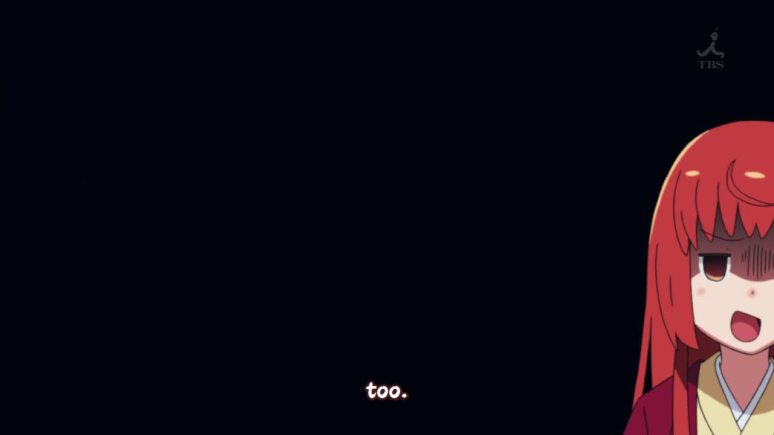 She doesn’t even get to say a whole word, just the last syllable. 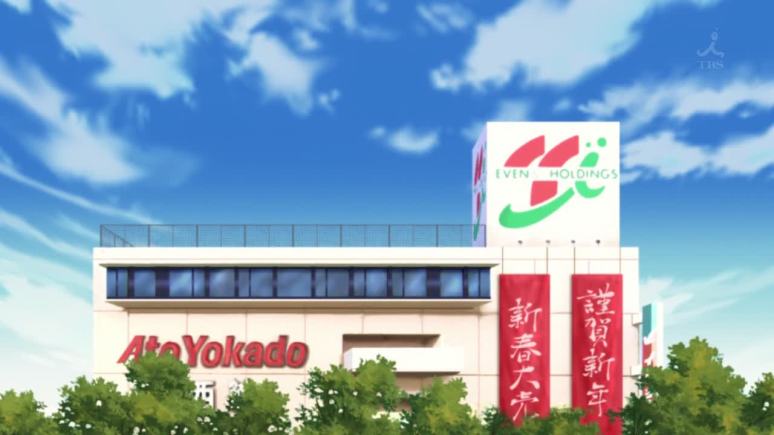 Ito Yokado and Seven & i Holdings are Japanese companies.

They start with a punning scene right away. The center is shin (新, new). 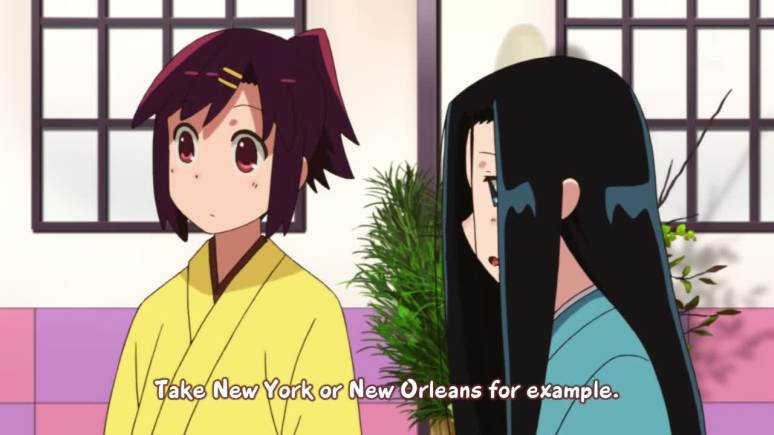 She says two stations, Shin-Okubo and Shin-Kawasaki. They aren’t really “new”, and for example Shin-Okubo is only a minute’s walk from Okubo. It’s quite common in Japan to name stations like that, for example Shin-Osaka and Shin-Yokohama (just to mention a few you’re likely to encounter if you travel by train in Japan). 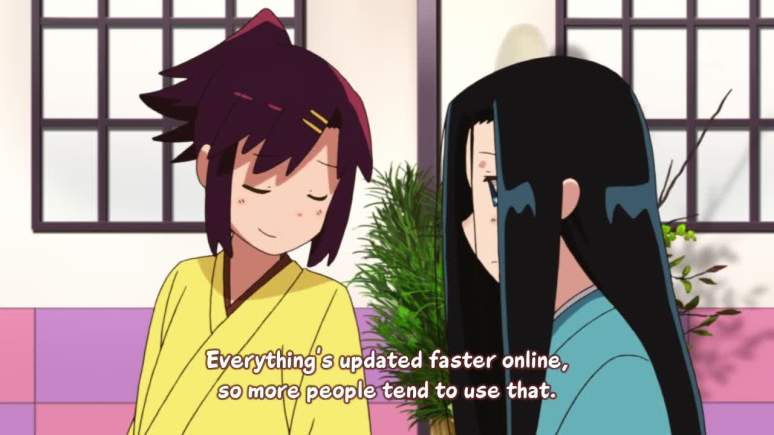 I don’t really know what happened here, but the second half of her sentence is kinda missing. She says that newspapers tend to be biased.

Okay, let me make something clear. In the case of this anime, where comedy is the center of everything, I think that keeping the script funny enjoys priority over literal accuracy. In this case a literal translation wouldn’t be funny at all and it wouldn’t even have any “new”s in it to connect it to the rest of the dialog. She lists sports, 新体操 (shintaisou, rhythmic gymnastics), 新卓球 (shin-takkyuu, lit. new table tennis, a modified version of table tennis) and synchronized swimming (which also starts with shin when transcribed to Japanese), and then Gankyou goes on to point out that in the latter the shin isn’t 新, just sounds the same.

And here we go again. Her part in the sentence was a “too” (and that was still the best choice), which required all their lines to be tweaked to that here. In Japanese, it was just the syllable su, which gave them quite a lot of freedom. Luckily except for Kigu’s line, it was possible to retain the original meanings. Kigu mentions 鯣 (surume, dried cuttlefish).

This one turned out quite good.

Well, she says “letters”, that’s why it’s 2 and 5 (for Yasu and Kumeta Kouji, the guy who draws and the guy who writes Joshiraku), but if you say syllable, it should be 2 and 6.

Remember the first half of the ending? The Jugemu-Jugemu part? Now that whole thing is the name in a rakugo story.

Kukuru and Gankyou teach you some Japanese. ポチ袋 (pochi-bukuro) are those envelopes, and the pochi is from another phrase (これっぽっち koreppocchi) that means “close to nothing”. 粗品 (soshina) is a modest way of calling a present you give, literally “bad product”. The Japanese are really modest when it comes to stuff like this.

The last performer, the star of the show is called the 取り (tori), which is a homophone to 鳥, bird. 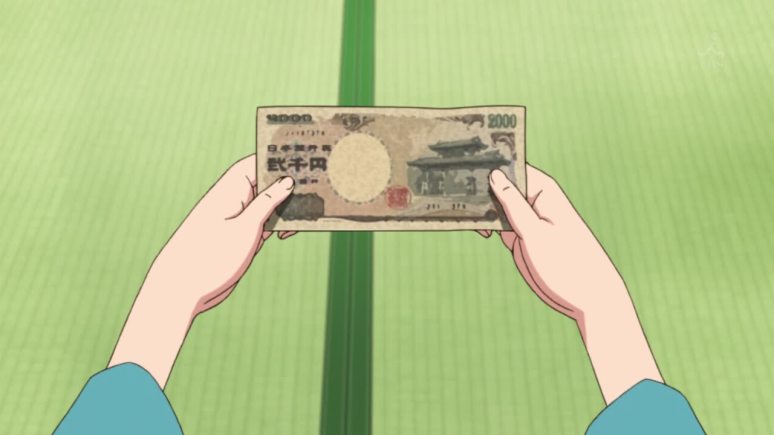 The 2000 yen bill isn’t in circulation anymore, so if you happen by one, that’s usually considered huge luck. It’s true though that vending machines don’t accept it anymore.

Many of those expensive Ginza clubs went down when the economic bubble collapsed in Japan.

Tatami mats have standard sizes and are used as the common means to measure the area of an apartment. Mine is 8.

I’d generally refrain from translating location names, but in this case the 地蔵 (jizou) in it refers to the protector deity that’s mentioned later. The full name is Sugamo Jizou Avenue Shopping Street. The Sugamon Tetora mentions is its mascot character. 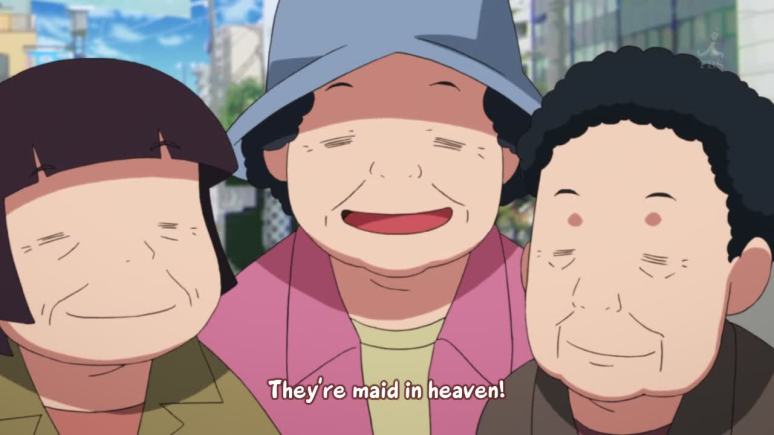 They’re punning on that maid (meido) and 冥土 (underworld) are homophones. 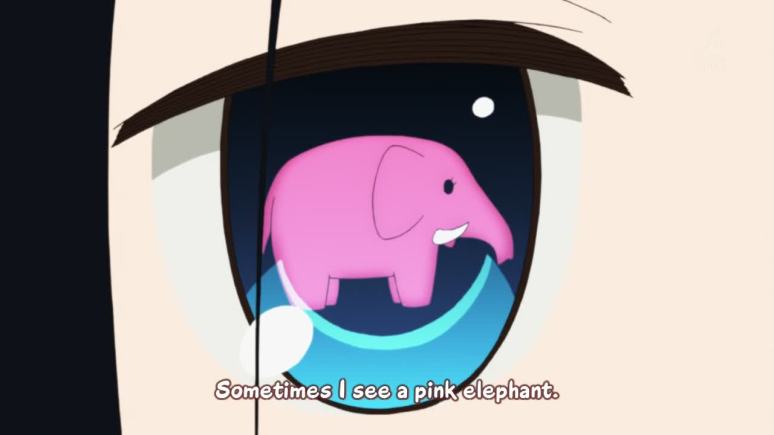 Just how drugged do you have to be for that?

The point is that their eyes met, not that she looked on them. 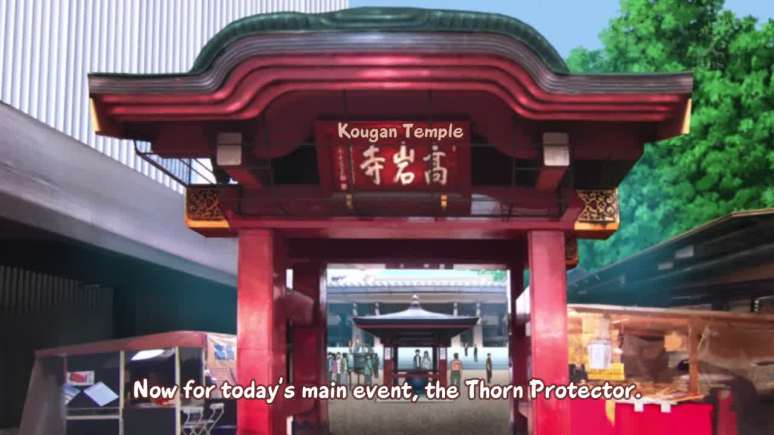 This is a reference to the Yuukian (有機庵) restaurant that’s really there.

Again, the second half of the sentence is mysteriously missing. “… but I feel so much older now.”

Mei and Satsuki are from Totoro. Both of their names mean May (Mei’s sounds the same, and Satsuki is an old Japanese name for May). 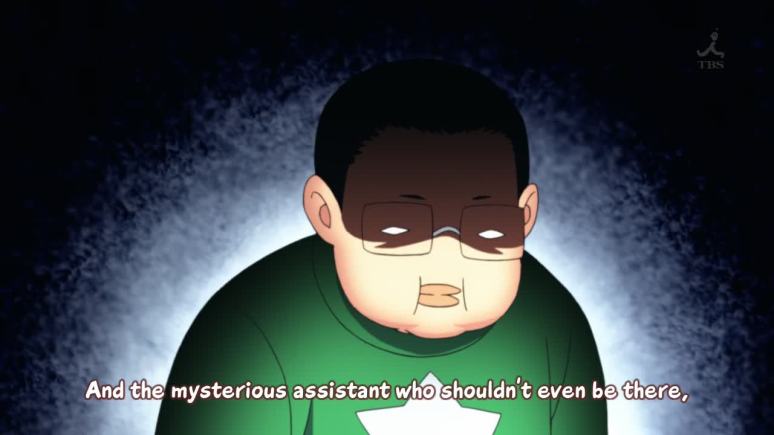 It’s a Kumeta inside joke. 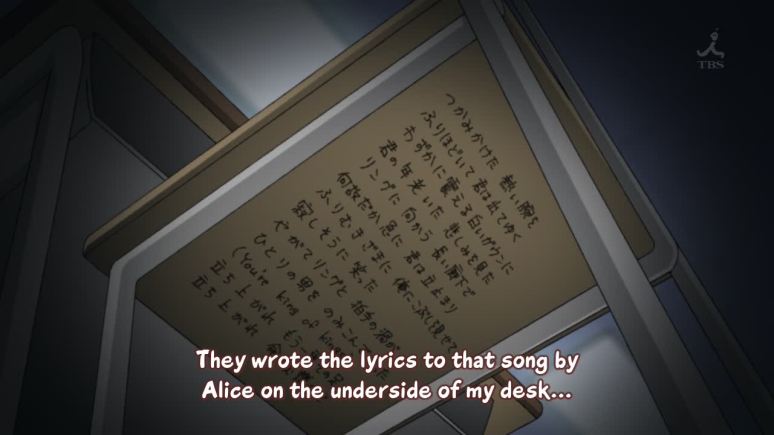 That’s the eleventh ending of Sora no Otoshimono, Champion by Alice.