The official lyrics of the opening have been released just in time for episode five, so I fixed a few lines. The fixes are as follows:

A wave of complaints from our favorite maniac depressed rakugo performer girl. 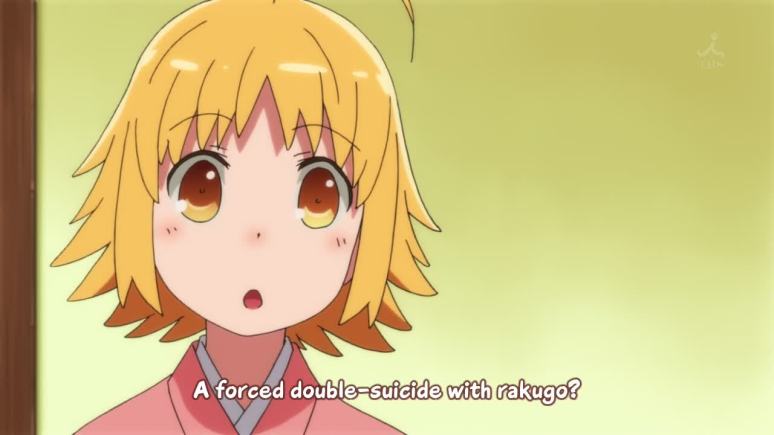 Remember that rubbing joke in an earlier episode? Well, apparently it’s not just a rubbing joke, but also a running joke.

There are a bunch of headlines in the newspaper that are funny (for the Japanese who know what they’re referring to), but too much effort to typeset. 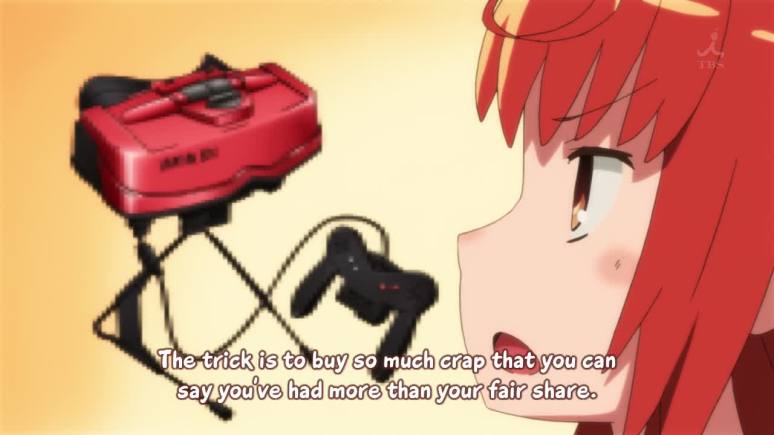 Game machines (and other fun things to spend your money on) for you. This brings back Nyarlko memories.

You probably noticed all the “share”s in the dialog. This is all I could do about the triple pun with the words 歌舞伎 (kabuki), the kabuki theater, 株価 (kabuka), stock prices and 傾く (kabuku), a verb that can mean both to act in a kabuki play and to spend recklessly.

That name she won’t say is the manga artist Akamatsu Ken’s.

Refers to Katsu Shintarou, who was caught at the Honolulu airport with weed and cocain hidden in his underwear. 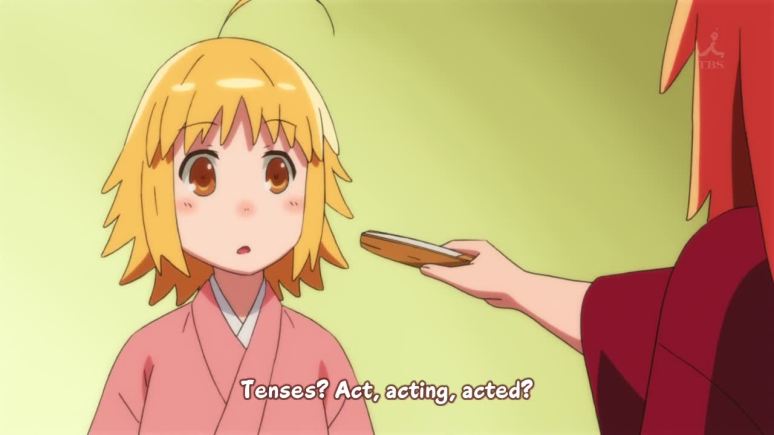 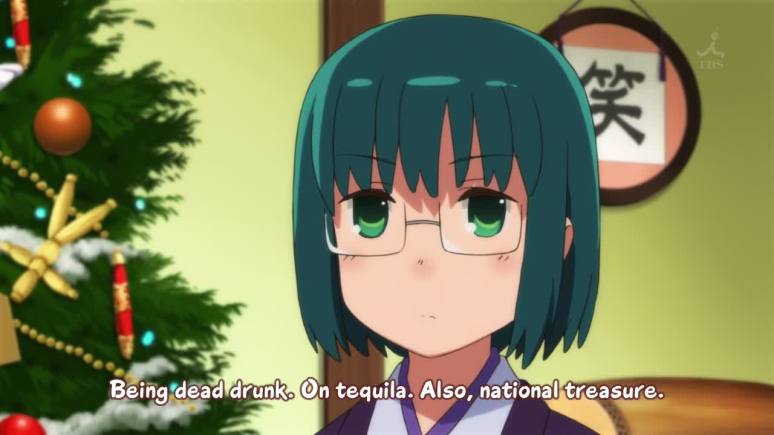 Ebizou reference again. He had a scandal when he got dead drunk on tequila, and that night didn’t end nicely for him. He also titled himself a Japanese national treasure.

Again that “three manly things” deal. The original is 飲む打つ買う (nomu utsu kau), which Kukuru twists into 飲む鬱カウンセリング (nomu utsu kaunseringu), where nomu refers to taking medicine, utsu is depression (you might know this one from Haruhi’s 憂鬱 (yuu-utsu), written with the same character) and psychiatric counseling. 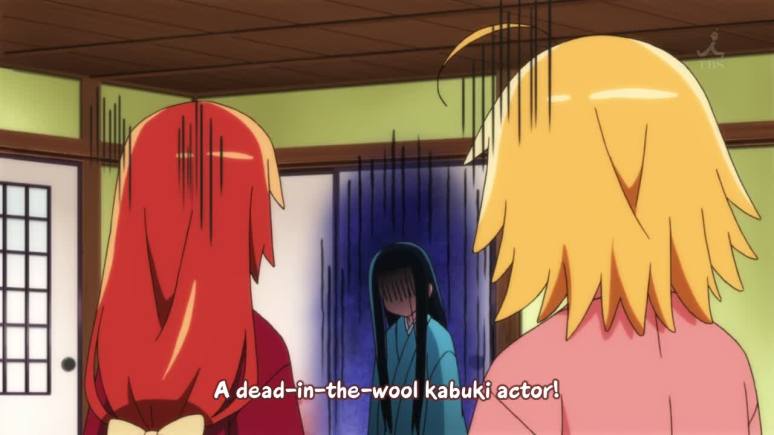 Intentional. Make it at least a bit punny.

Your face when “Falsus Scriptural rosary”. 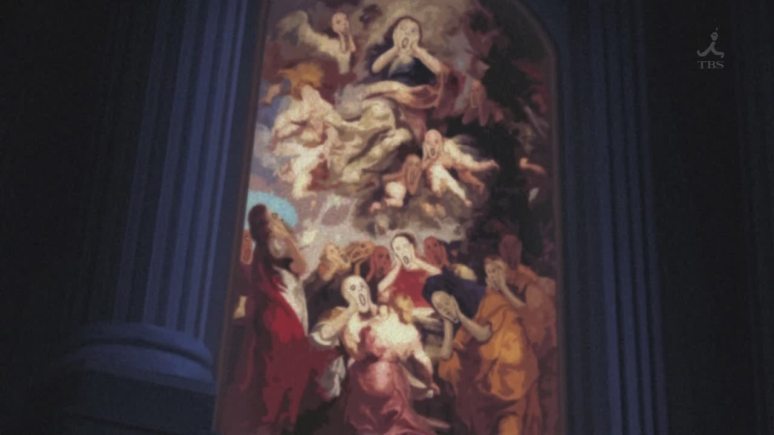 The painting is Rubens’s Assumption of the Virgin, just all faces are replaced with the one from Munch’s Scream. The whole scene is a Dog of Flanders reference, even the music playing in the background (Nearer My God to Thee, also said to have been the last song played on the Titanic before it sunk).

Miracle on 34th Street reference. She just changes it to 3rd district, Shinjuku.

A very famous quote from Laputa: A castle in the sky. “That’s some human garbage.”

Literally “You mustn’t make otaku-ish exclamations.” This is why I love my editors.

Miyazaki Hayao (director of lots of famous Ghibli movies, including Nausicaä of the Valley of the Wind and Howl’s Moving Castle, both mentioned later) and his son, Miyazaki Gorou (director of Tales from Earthsea (this is the movie censored from a later sentence) and From up Poppy Hill). Cagliostro (カリ城 karishiro), short for Castle of Cagliostro, a Lupin movie and Go, Panda (パンコパ pankopa), short for Panda! Go, Panda! are both works by the elder Miyazaki. 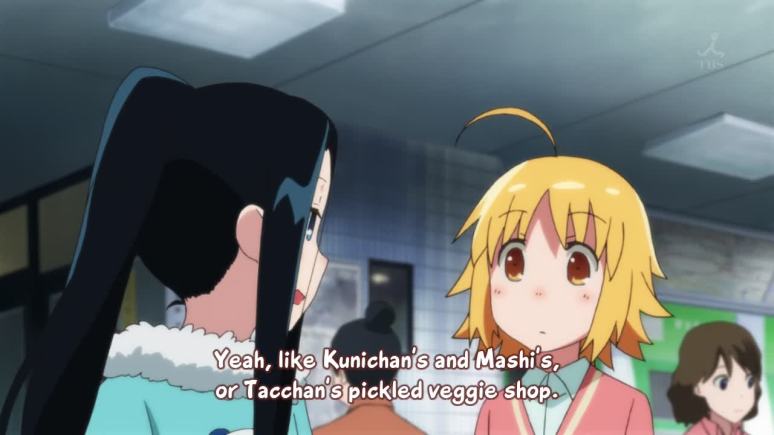 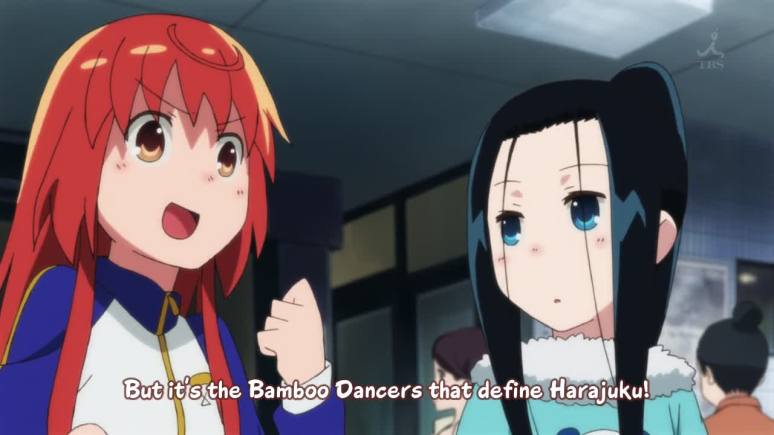 The Bamboo Dancers (竹の子族 takenoko-zoku, lit Bamboo Shoot Clan) were dancers in Harajuku about forty years ago. They are considered the predecessors of modern idol groups. 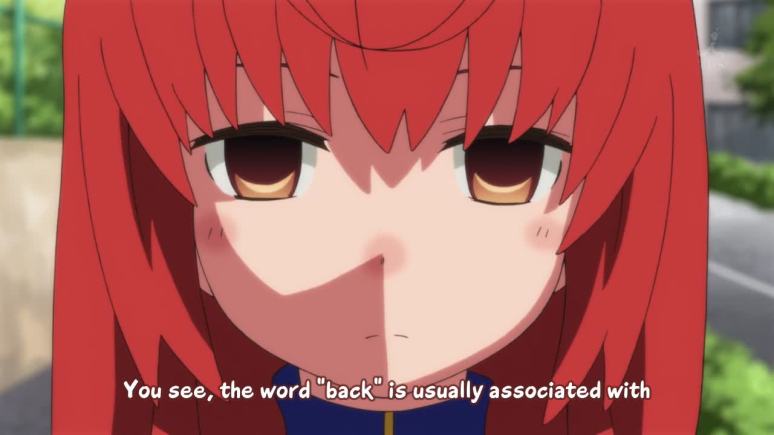 That area is really called 裏原宿 (ura-Harajuku, shortened as Urahara), so let me emphasize that this is not a Bleach reference (at least as far as I know). 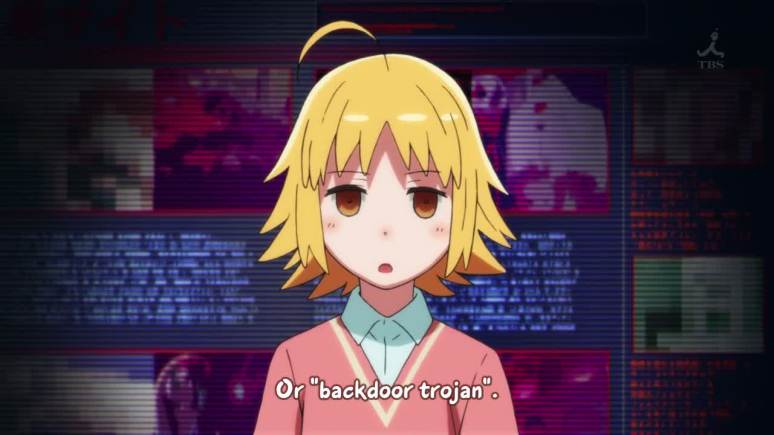 This is the only one of the “back” puns that I had to change. 裏サイト (ura-saito) refers to underground websites (usually of schools) where people who know about it can anonymously let out some steam. 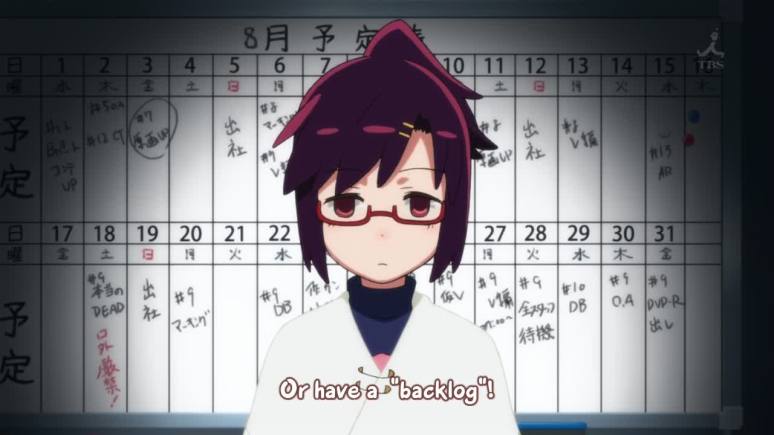 In the background you can see the Joshiraku production schedule for August, although this doesn’t yet reflect the airtime changes due to the Olympics. Unlike Shaft (notorious for leaving animation to the last minute, often resulting in half-assed solutions), JC Staff seems to be well on schedule.

Nico Nico‘s headquarters in the background. Although the place they are at isn’t Back-Hara’ yet.

The blue mag features Kyary Pamyu Pamyu (referenced later by Kukuru), while the red ones are probably references to MC Sister and CanCam. 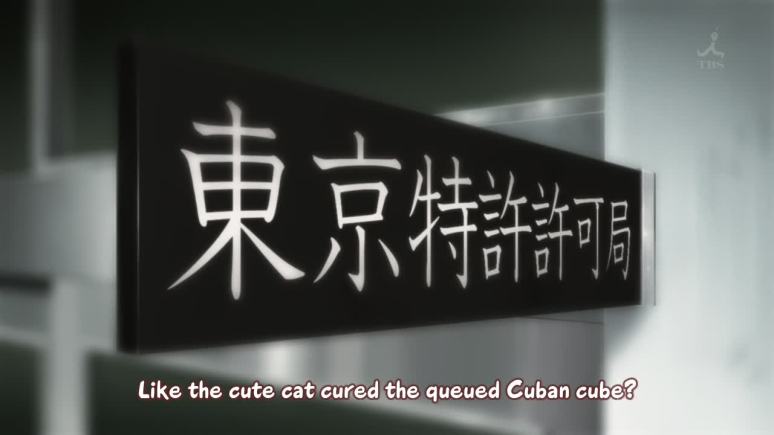 Translating tongue-twisters (especially when accompanied by related animation) is a nightmare. The originals:

I love it how Zwill handled this. By the way, the shop really is in Harajuku, it’s the Marion Crepes (マリオンクレープ marion kureepu).

Probably a reference to Dragon Quest.

I don’t get it either.

Reference to Creamy Mami, the Magic Angel, and the crepe shop at Kunitachi from that anime.

I have no idea what the PK thing she mentions (ピーケーグルメ piikeegurume) is.

爪に火を灯す (tsume ni hi wo tomosu) is an idiom that literally translates to “light your fingernails” and it means to live a very frugal life – you spend so little money that you use your own nails for fire. She puns on the literal and the idiomatic meanings. 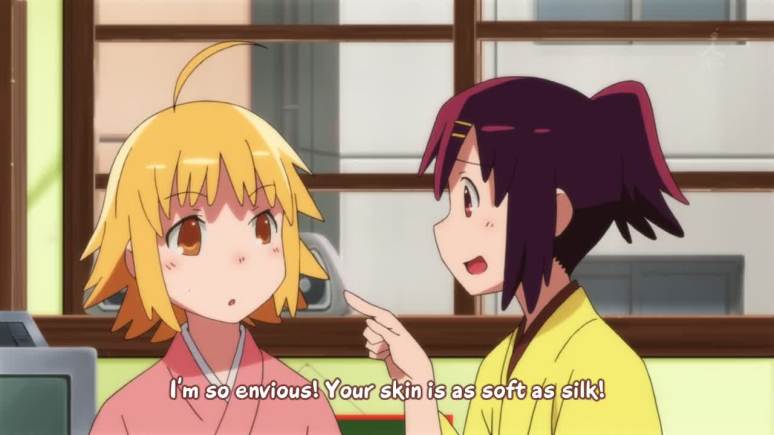 姐御肌 (anego-hada), although it has hada (skin) in it, it means a big sister character. Marii clearly didn’t know this expression.

倶梨伽羅紋紋 (kurikara-monmon) just means “tattoo”, but as Kurikara is a dragon god (a naga), I turned it into a reference.

No, it’s not Voldemort, it’s Sakai Noriko, an idol mentioned in an earlier episode too. 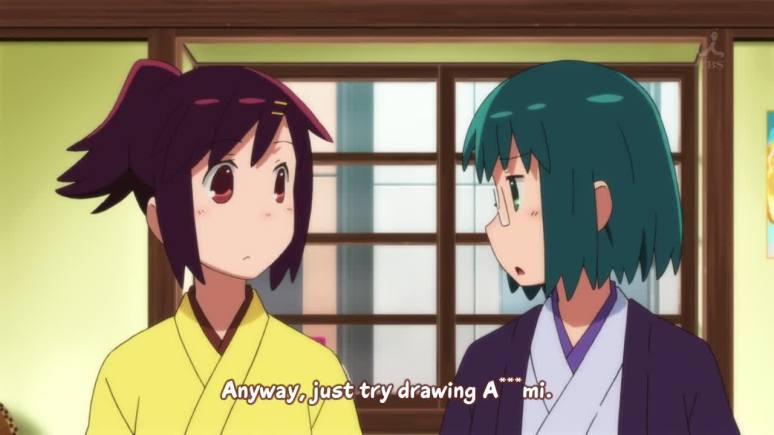 The first of those who Tetora thought of, Amami Yuuki. The others were Yonekura Ryouko and Nakama Yukie (not counting the Afghan hound and Hiroshima prefecture’s seal).

Anago from the Sazae-san manga/anime. It’s a pun on how similar 姐御 (anego, sister) and his name are.

Disneyland in trouble. I don’t want to make another screenshot just for the villain, but the white pattern on her dress is the kanji 美 for beauty.

DHA stands for docos— dosoc— Well I’m not going to type that in, it’s some chemical. I guess you know DNA. iPS is short for a kind of stem cells. Also this typeset lacks blur. 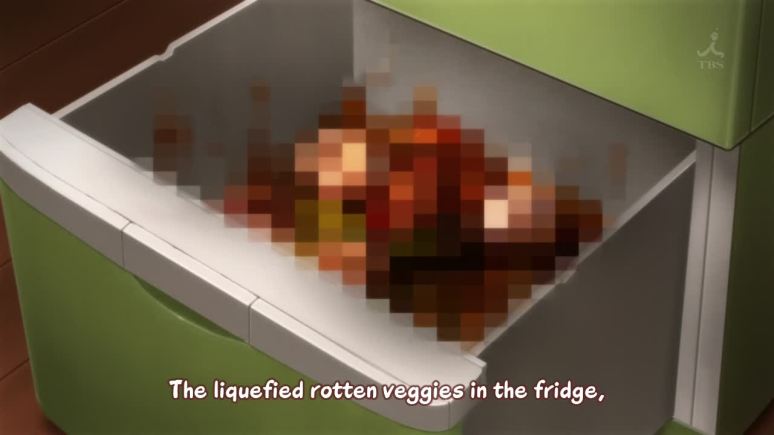 On her haori, those are bugs from Nausicaä.

The ending’s official lyrics are yet to be released. (Though I doubt there’d be much that requires fixing.)