The honeymoon period’s over for Tari Tari. Let’s get down to business. I didn’t review any of Doki’s offerings last season because their translators were pretty shitty. I think they’ve cleaned things up since then… sorta. You… You’ll see what I mean. 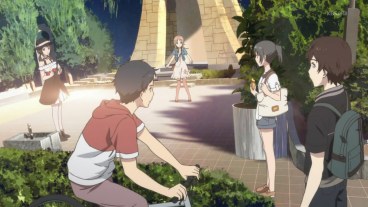 r/a/ge level: 60/100. Better than Crunchyroll because they have a fan translator!

+ Karaoke for the opening and ending!

No. Just no. Seriously, just picture a mom playing rocket ship with her little girl and shouting, “There!” Can you see it? Try closing your eyes. It looks fucking ridiculous. It hasn’t even been a second, and the rest of the episode is already framed in a negative light for me. Buckle up. We’re in for a long ride.

Crunchyroll went with “Up you go!” which is acceptable. Personally, I’d say, “Upsy daisy!” It’s cutesy, flowery (no pun intended), and something real parents say to their kids. Maybe Doki’s translator/editor had a terrible childhood or no parents, so he/she didn’t know what to put here. If so, that’s really sad, and I’m sorry.

And already we have a mistranslation. In case you only watched Doki’s version, you should know that the man in the picture is her father. Yeah…

It should be “You only have yourself to blame, since you were the one who made too much.” Crunchyroll probably has a shorter version, but I don’t remember the line off the top of my head. Point is, the line shouldn’t’ve been so wrong in the first place. 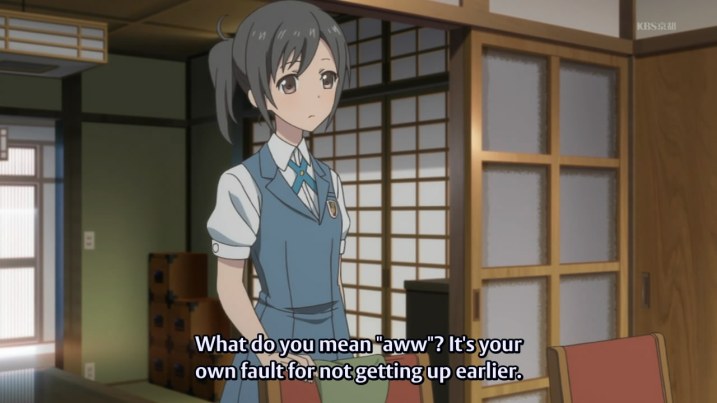 Crunchyroll and Doki had similar lines for this scene in that they phrase the first part as a question. Honestly, it could be phrased as a normal sentence and read much better.

But really, British English is so bad.

“Well, I’m off” would better fit the Japanese audio. Just a suggestion. It’s not a big deal here.

Crunchyroll’s “forever alone” felt a bit shoehorned, but I suppose it fits because casuals would actually say something that stupid in real life. Doki’s choice, however, is stilted and dumb. Both are vastly inferior to my suggestion. Too bad I didn’t edit this show for any group.

Oh, thank goodness I can enjoy the choir again. They sound soooooo good. 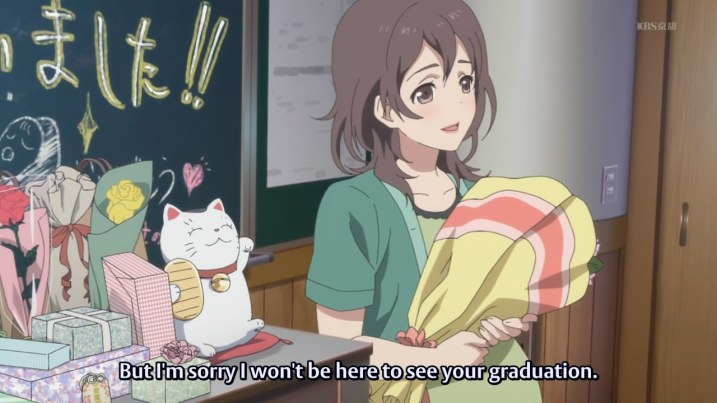 “Then what if we held our graduation ceremony right now?”

You should really specify an article or indicate some kind of possession for the graduation ceremony. It’s basically the polar opposite of the “nationals” problem. “Having graduation ceremony” sounds like what Lenny from Of Mice and Men would say. Surprisingly, none of the characters in this anime are especially autistic, so that isn’t an excuse. There shouldn’t be a comma after “then” either because it’s essentially an “if-then” statement. 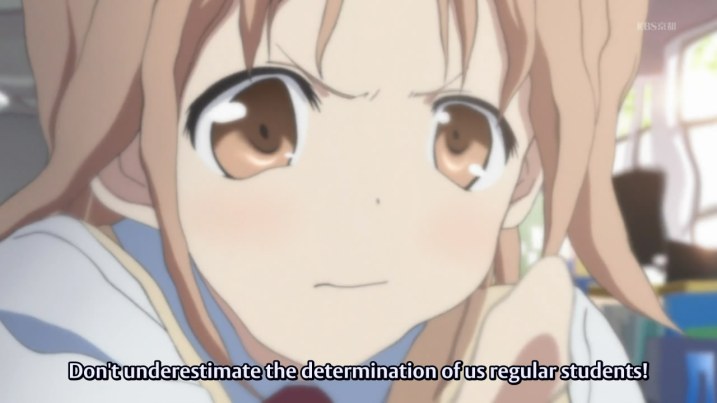 “Don’t underestimate the determination of an ordinary student!”

“Of us” sounds weird. Normally I’d want to put the possessor in front of the object, but I don’t really know how, so whatever.

Miyamoto (headphones girl) was just helping Ms. Takahashi. At the end of Miyamoto’s service, Takahashi responds with a “Right, thanks.” God no. 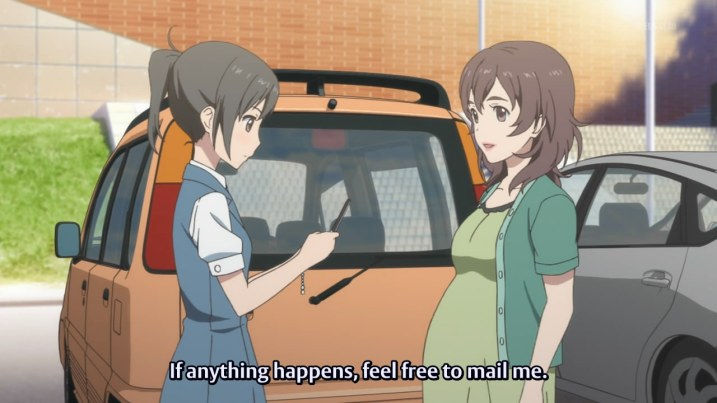 First of all, comma splice. The first line is actually two independent clauses that need to be separated. Second, that’s her email address. It’d be nice if that were specified because the next line has “mail,” and the first thing most people think of when they hear “mail” is probably snail mail—further reinforced by “address” in the first line.  I wonder if Doki’s translator actually knows the real definition of those words or if he just translated Engrish into English, which is rarely a good idea.

“Here’s my email address/number. / If anything happens, feel free to email/text me.” And that’s how you skin a cat.

“Sorry. I wanted to make sure I ate before I went to my club.”

The original just sounds awkward without the possessive. Who knows if he meant clubbing as in partying or clubbing as hitting things? Sometimes, you gotta make these things clear.

Apostrophe misuse for like four lines in a row. Doki should really hire a new editor/QC. This is elementary school level stuff.

“Right now” should have a comma after it. Prepositional phrases four words or longer could probably use a comma to separate them from the independent clause. There are some words or phrases that could really use it with less because they’re typically read with a pause. Examples include but are not limited to “alas,” “unfortunately,” “however,” and, of course, “right now.” The second part of the second doesn’t connect well to the first either. It could use some contextual transition or some shit.

For example, “Right now, singing’s the most important thing to me, but soon I’ll have to graduate, go to college, and find a job.” 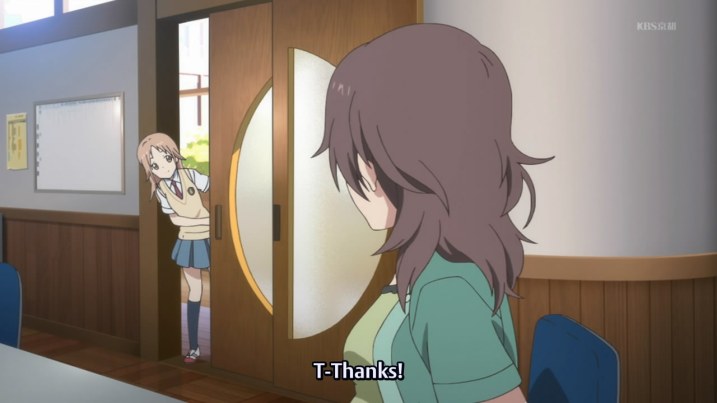 Otherwise, it’s like “t-tanks!” Also, their heads are kinda huge. 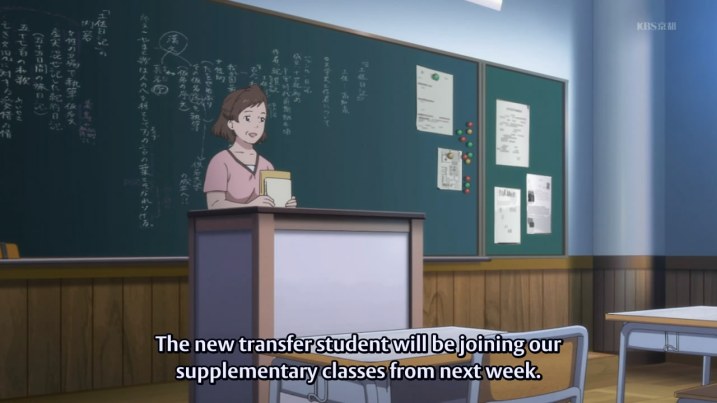 He’s from the future?! Nix “from” and the line becomes so much better.

“I was just letting all my embarrassment out.”

Crunchyroll and Doki didn’t do a great job with this line. “So there was none left” is unnecessary and sounds terrible.

Once again, Doki didn’t translate the line the conventional way, and it totally sucks and makes no sense. 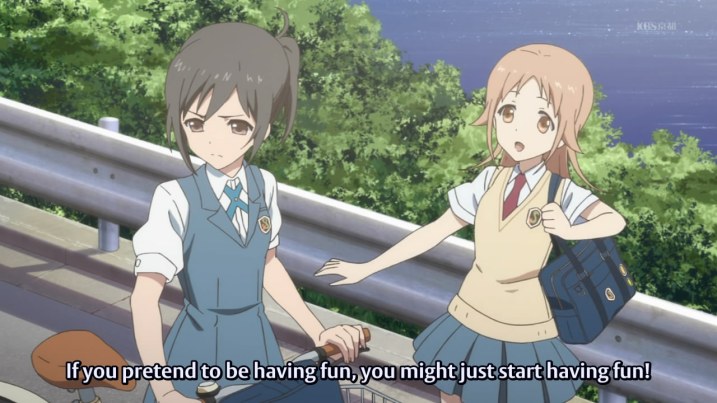 “If you pretend to have fun, you might actually start having fun!”

So my Pulitzer Prize for fansub editing just came in the mail. I’m totally awesome. Doki is not, however. Their translation is derp as fuck. Real A+ (or B+) quality.

“I’m doing my best to make Japan feel like home again” or something.

I’m getting tired of fixing their shitty lines.

“I hope I can show you Japan someday.”

Real good. Introduce makes it sounds like the country is a person. Heh.

This is probably the least poorly translated release from Doki in a long time. Everything made sense, even if there were a few mistranslations, and if you like British English, uh… there’s that.

+ Flow is slightly better than the average fansub

A lot. Natural phrasing seems to be a problem for Doki. It’s not a matter of liberal or literal either. The dialogue just reads horribly at times and jolts you out of the experience. From the first few minutes—no, seconds—I was already put off by their release. Translating “literally” doesn’t mean looking up the dictionary definition of the word. I can’t even say Doki’s translating literally because they get shit wrong sometimes, and they occasionally go with unconventional translations, so what the fuck? They had their own translator for this release, yet they still released after HorribleSubs and Commie without checking the translation. What an incredible waste of time.

– Really shitty phrasing in many, many places

Tags: 3 out of 5, doki, fansub, review, script, tari tari
This entry was posted by brainchild.