Polar Bear Cafe is hilarious, and you should all watch it.

r/a/ge level: 10/100. I’m a little late on this, but I’d assume everyone is fine with Crunchyroll because, while they translated all the animal names, they didn’t localize the puns.

No honorifics, no opening or ending lyrics, name order is not applicable because the characters are referred to by their animal names with “Mr.” added sometimes. As I said before, puns are not localized. 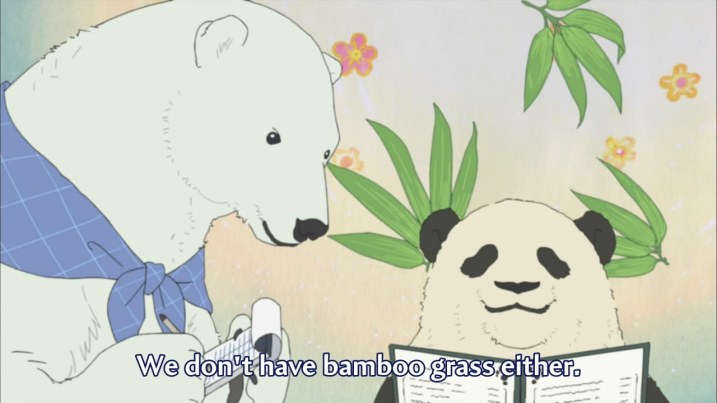 Maybe I’m just easily amused, but I thought this was hilarious—probably one of the funnier jokes of the season. This is the kind of humor you can expect from Polar Bear Cafe. Panda is generally the dumbass while Polar Bear keeps it grounded. Although, he has his moments, too.

Overall, it’s really simple dialogue, so there’s not a lot to mess up. The greatness comes from the characters interacting and their reactions. 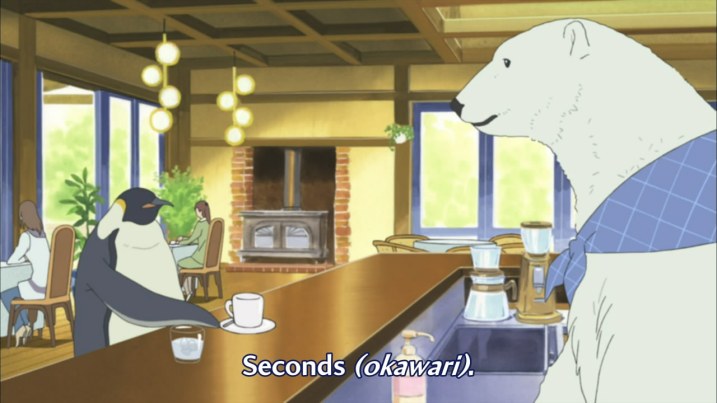 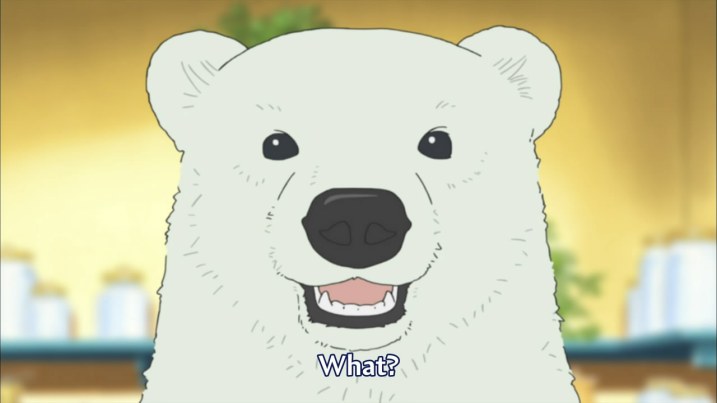 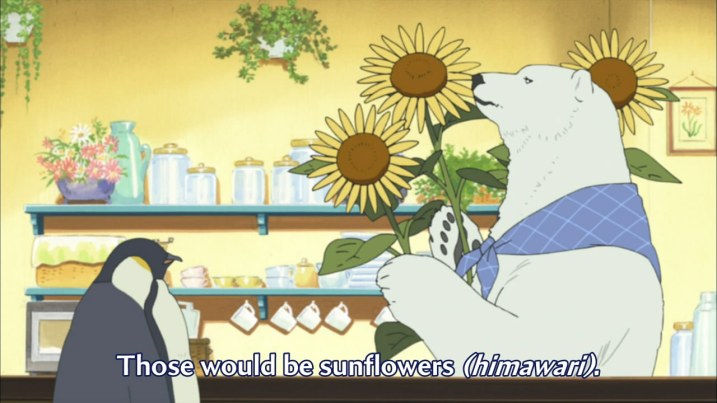 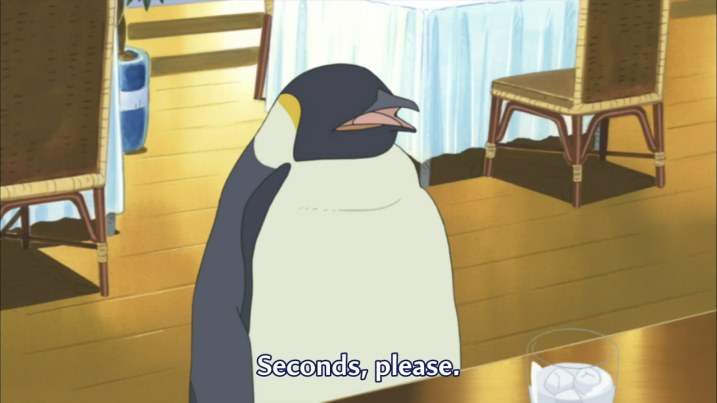 The dialogue is translated literally, and the Japanese is in parentheses. I can see why Crunchyroll did this the way they did. In English, it would be very difficult if not impossible* to localize the puns because Polar Bear actually pulls out the things he is referring to. There are no words that mean all those things and are closely related in English. If you hate localization, Crunchyroll’s release is probably right up your alley. And even if you prefer localization, it’s not so bad.

In addition, I can only imagine what groups like Commie or gg would do in this situation. Would they translate the lines with no explanation? Would they do what Crunchyroll did? Would they completely ignore the puns and have the translation be completely different? Or would they do something else? All the options have their pros and cons, and really, it’s a tough choice depending on group philosophy. Unfortunately, none of the options would have this exchange be funny to English speakers. At least the rest of the show makes up for the the pun segments. 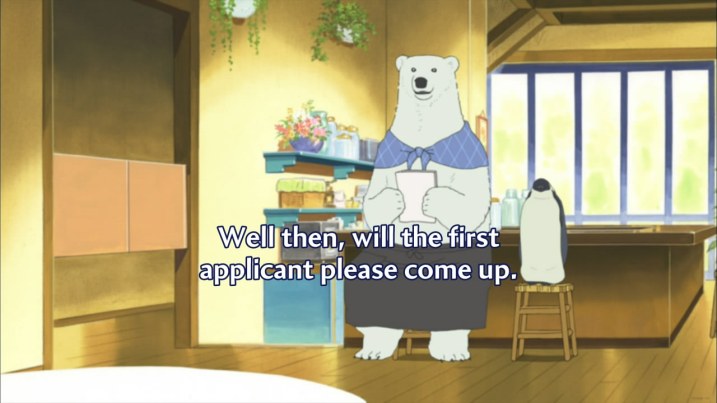 HorribleSubs typesetting es number one. I wonder if Crunchyroll had the same problem.

This is just one of many comma splices. Crunchyroll translators are very good, but their grasp of English grammar isn’t quite on the level of their translation skills. Sometimes, comma splices are excusable because everyone does it for certain sentences, e.g., “Come on, let’s go.” I honestly wouldn’t penalize or look down on an editor who does that. A lot of people write it like that, and for most people, the comma gives the sentence a visual flow that’s very different than if you read it with a period. However, this isn’t one of those cases. Neither are the other comma splices in most of Crunchyroll’s releases. They’re simply textbook examples of bad grammar, adding nothing to the subs.

They shouldn’t’ve used a comma here because “so,” when used as a conjunction, shows a cause and effect, or claim and reason, relationship between clauses. For example, “Jane is lactose intolerant, so she doesn’t drink milk.” A quick and dirty way to check if you’re using “so” correctly would be to change the structure of the sentence and see if it still makes sense. From the previous example, “Jane doesn’t drink milk because she is lactose intolerant.” This trick probably won’t work every time, but it’s a good rule of thumb if you’re unsure. If I do this with Crunchyroll’s line, it doesn’t make sense: “You’re looking to work two days a week because let’s see.” The two clauses are largely unrelated; the first clause is just filler dialogue for the hiring manager to think, and the second sentence uses “so” as a transition. tl;dr: Stay in school, kids. 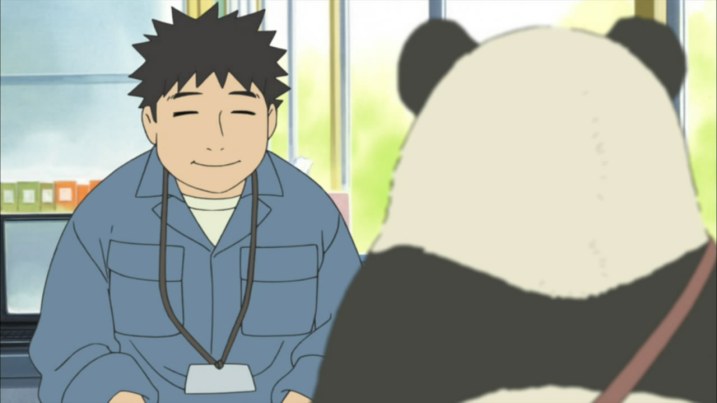 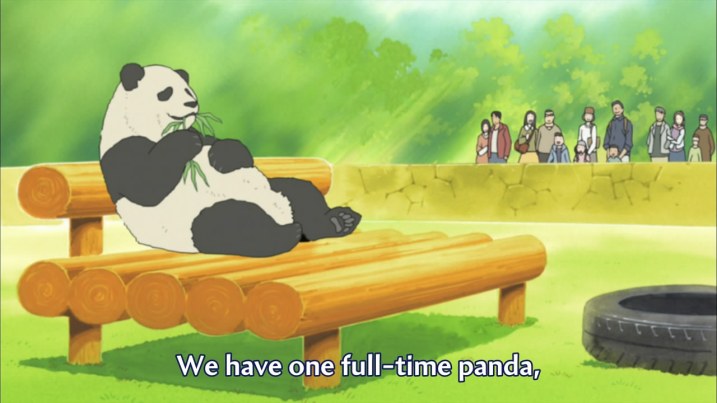 Dude, this anime is fucking hilarious. The hiring manager isn’t even making a joke here. It’s the ridiculousness of the premise that really makes the show most of the time. Panda is just so hopelessly dumb, and most of the characters on the show are enabling his stupidity in some way. It’s really adorable and funny. 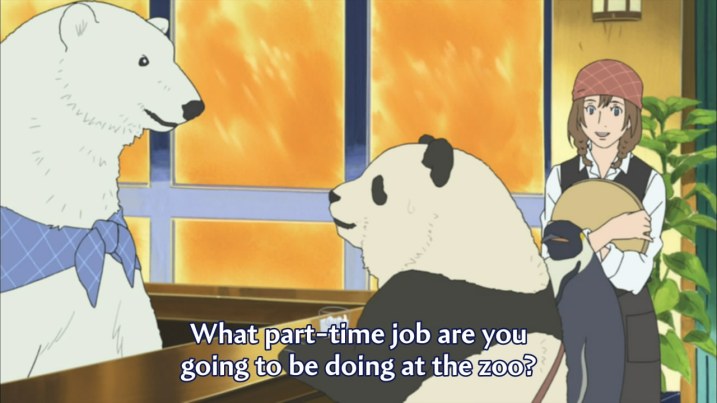 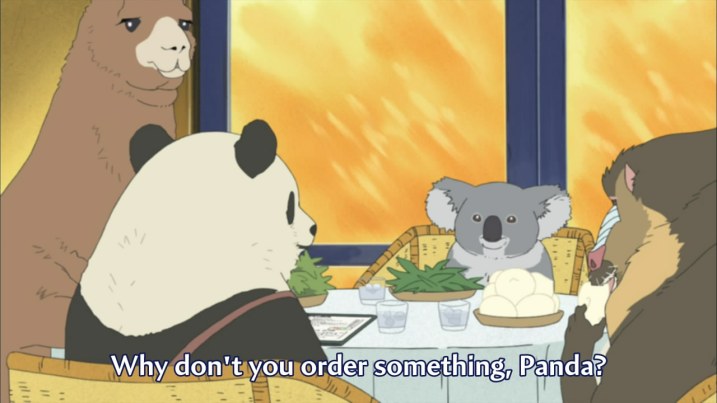 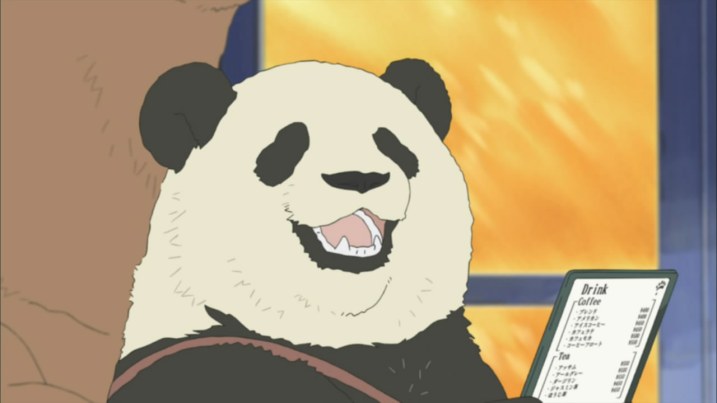 Polar Bear, Panda, and the other animals are getting a little closer. I’ll have to see if the next few episodes continue the character development or if they’ll return to the status quo every few episodes. But for now, not only does Polar Bear Cafe do comedy well, it also has some dramatic chops. No dialogue required. Just seeing the characters’ facial expressions tells you everything you need to know. Not many anime have been able to demonstrate this.

The dialogue is very simple, so Crunchyroll doesn’t have much room to fuck up. There’s not much to say. Despite, the incoming wall of text, the release was excellent. It’s just that the handling of the puns was very average.

+ Show of the season

I understand translating wordplay to be as funny or have the same feel in English as it does in Japanese is quite the tall order, and Crunchyroll was not up to the task. Even so, Vale suggested a translation for the first few lines of the exchange that remained true to the source and actually had some wordplay going on. It was definitely an improvement upon Crunchyroll’s translation and even had me question if they simply took the easy way out, but neither were especially funny. I don’t have much faith in Crunchyroll handling them well. The show’s charm comes from the character interactions, not the dialogue, anyway.

Overall Grade: 4 talking animals… out of 5.