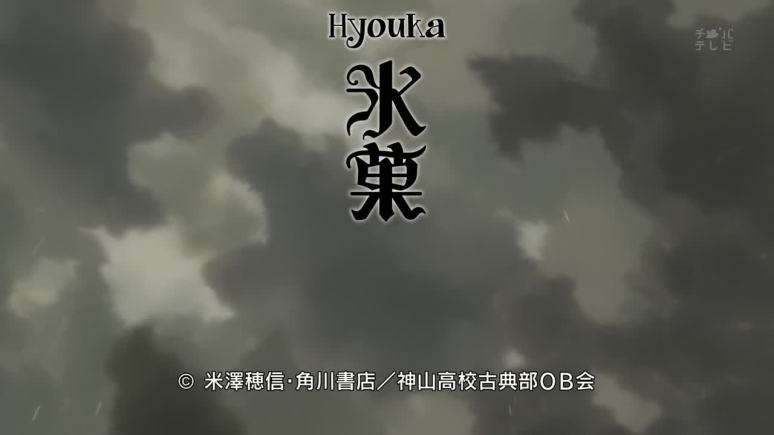 It took whole three seconds for the show to make me despair. If the logo shows up at this time, that means there’s no opening, which means ninety seconds more dialog. (Not to mention there’s no ending either, which put the last nail in my coffin.) 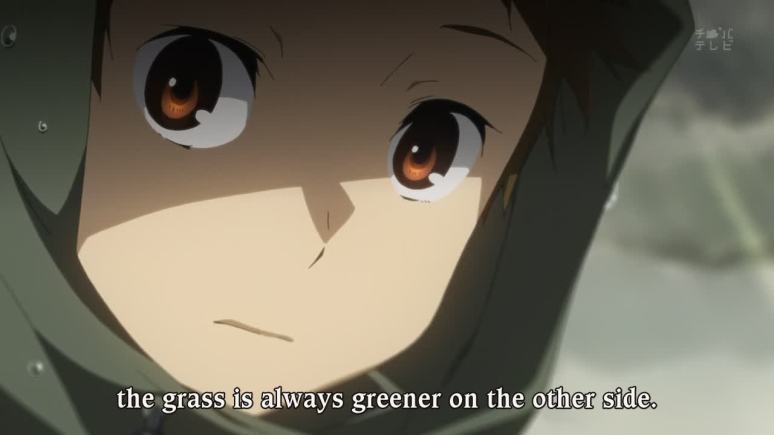 This coming out from Houtarou totally caught me off guard.  I was under the impression he’s perfectly content with his dull, low-energy life…

Are you sure you’re sure?

That’s right. You can travel all across India and Turkey, but as soon as you arrive in East Europe (she’s in Pristina, Kosovo) you are attacked by robbers. 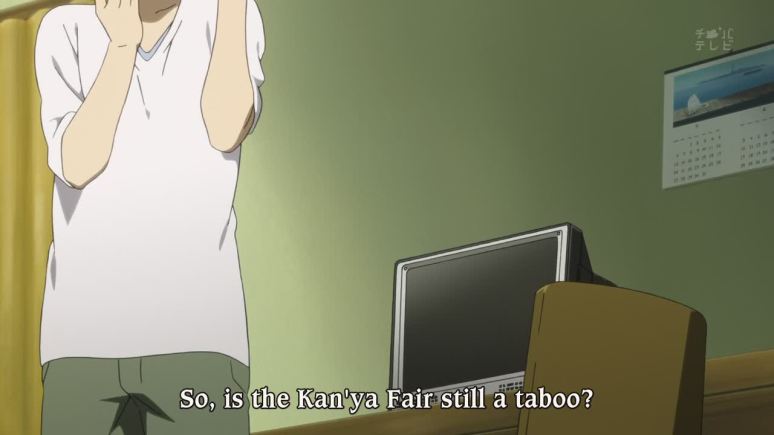 I reacted just as Houtarou.

It’s far from over.

If you watched the episode already, you know why “burn” is the perfect choice of a word here. 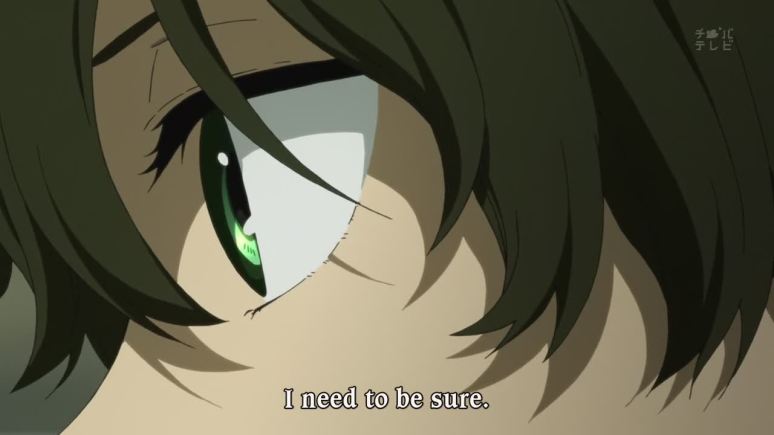 His character is evolving much faster than I anticipated. 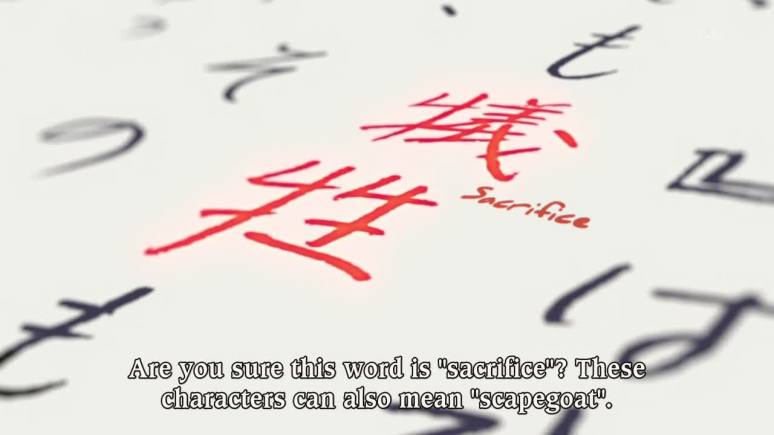 It’s a pain in the ass when the Japanese start playing around with the meanings and readings of the kanji. Actually both 犠牲 (gisei) and 生け贄 (ikenie) can mean both willing and unwilling sacrifice (scapegoat). As Chitanda says, “they are essentially the same thing”.

Unless you paid attention to her nametag back in that earlier episode, and you know that those characters for “Youko” are rare (which is probably because 養子 read as youshi means adopted son), this couldn’t be guessed. 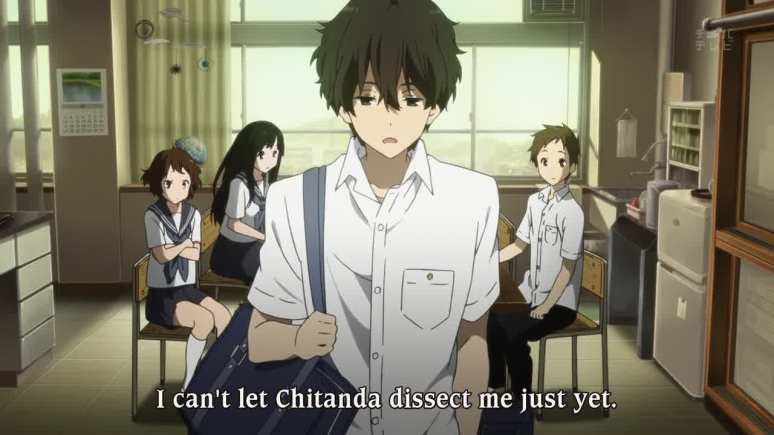 I’d love to see her dissecting him.

夏至 (geshi) is the tenth of the solar terms. It’s a month from now.

I didn’t realize on the workraw, but the title of the book she returned to the shelf is quite symbolic in this scene. It’s 忘れ華 (probably read wasurebana), which literally means “flower of forgetting” – pretty much the exact opposite of a forget-me-not. As she says, she hoped that she could finally leave those events behind her.

I’m afraid this may be a three-way pun. 猛獣 (moujuu, lit beast) and 亡者 (mouja) sound very similar, which is one end of the pun, but mouja can mean both “maniac” and “dead”. He obviously means the maniac in this case, but considering how Sekitani Jun might be dead by this time, I wouldn’t be surprised if the word choice is intentional. I originally had “dead set on small details” to keep the dead pun, but forgot to make a note so it ended up edited.

In contrast to Mrs Itoigawa, the tenses she uses imply that she considers him to be alive still.

This storm of questions is really unsettling. (Seeing how Oreki looks at her, I’m sure he’s apologizing in his head to the teacher for bringing Chitanda.)

Those glasses tell a tale. 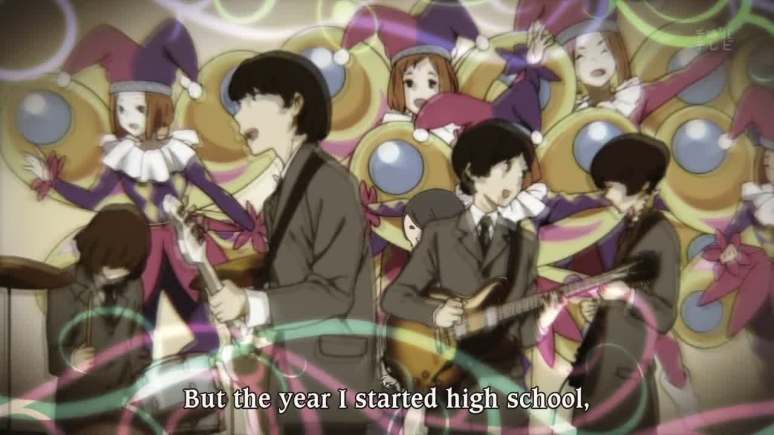 The guitar looks like a Gibson ES-335 with sunburst coloring. The white bass guitar is probably a Fender, but it’s really hard to say from this angle. As for the guy’s guitar in the back, it’s close to impossible to tell, but from the position of the pegheads, I’d say it’s probably a Fender too. 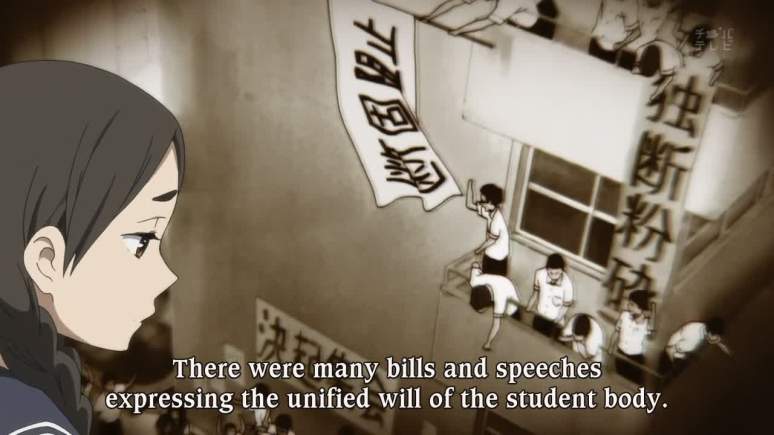 The sign on the wall says 決起集会 (kekki-shuukai, rally). The banners are 断固阻止 (danko-soshi, stand firm) and 独断粉砕 (dokudan-funsai, smash dogmatism). The rest of the flags showing up during the flashbacks are similar, all about how they’re opposing the shortening of the culture fair. I’m not gonna point them all out, just interesting ones (if I find any).

She uses the phrase 貧乏籤を引かされた (binboukuji wo hikasareta). It means what the line says, that they made him take all the blame, I’m just pointing it out because it’s an interesting phrase.

This is a personal ID card (something I think no longer exists in Japan), with most details erased. I find it funny that they didn’t erase his student number, since the school could identify him in a flash if they knew that. (It’s also funny that the first hit for 50071 is the MS SharePoint “could not connect to database” error.)

“Success to the indefinite (length) strike! Negotiations broken off by the school!” (無期限スト貫徹！団交決裂は校側に非) and “Justice is on our side! Strike in action! Teachers, listen to our demands!” (正義は我に・スト決行中・教師は要求に応えよ).

In the book it clearly says that the whole fire might have been intentional. 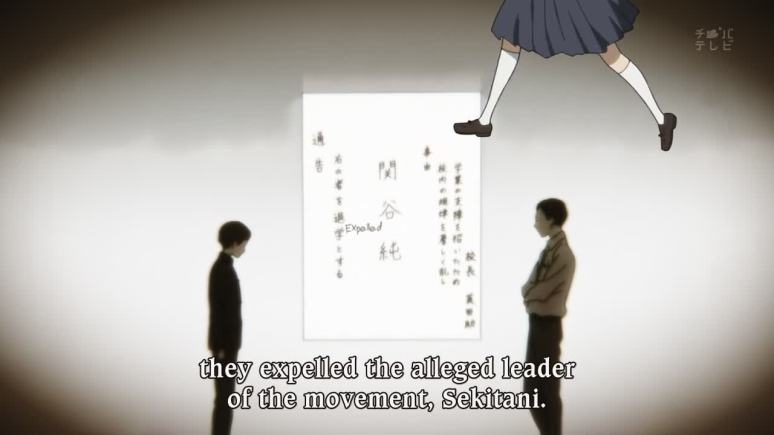 The moment he said “lame” (くだらない kudaranai), I feared for the worst. I got it. 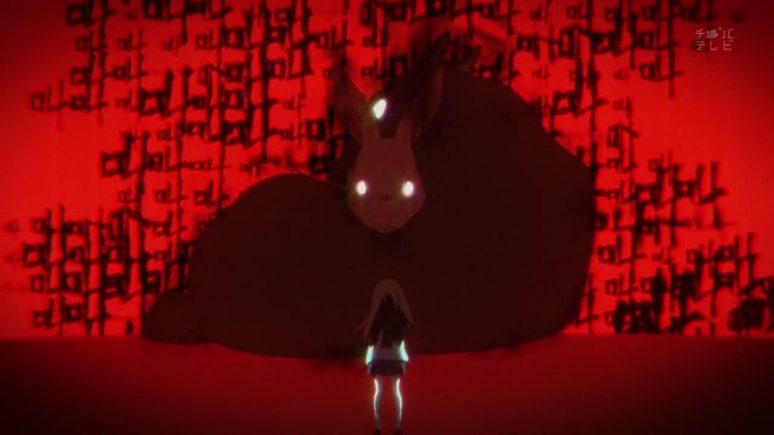 Whoa. I knew KyoAni was awesome, but now they reached Shaft levels. The characters are all 叫 (sakebu), meaning “to scream”. 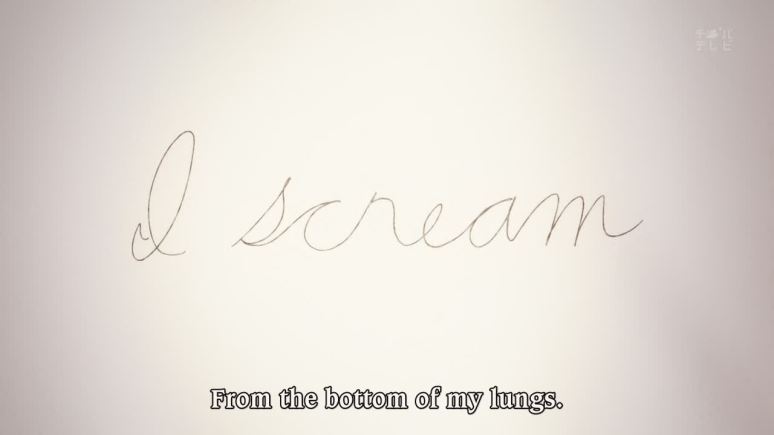 I screamed too. (He repeats “I scream” in Japanese, which allowed me a bit of scriptwriting.)

It’s all Oreki’s. They’re so mean to him. 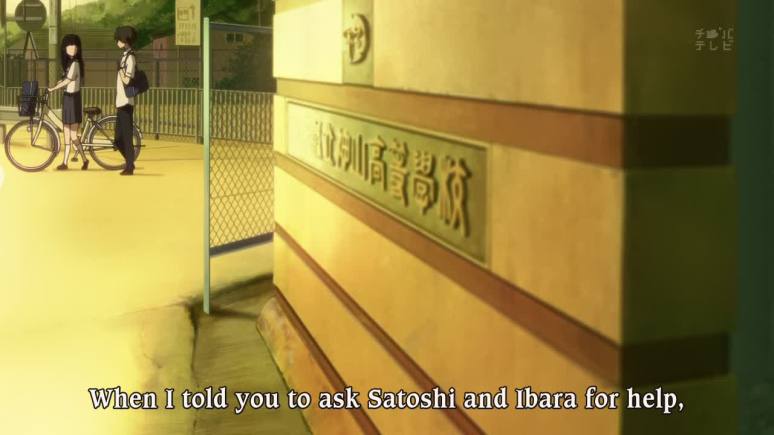 The sign is just the official name for Kami High, but I really love that archaic font. 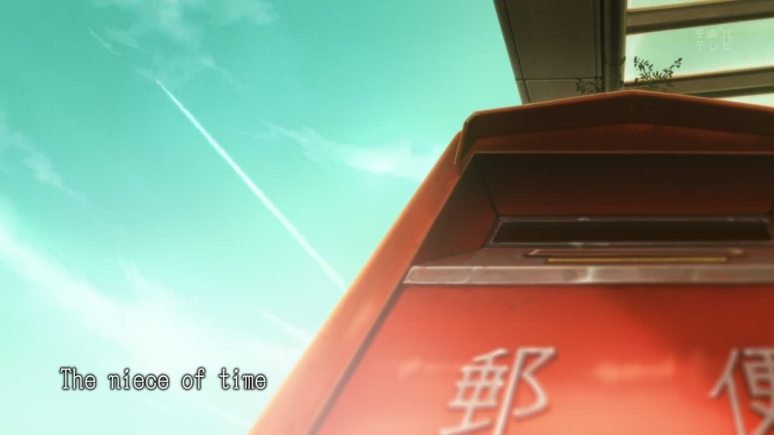 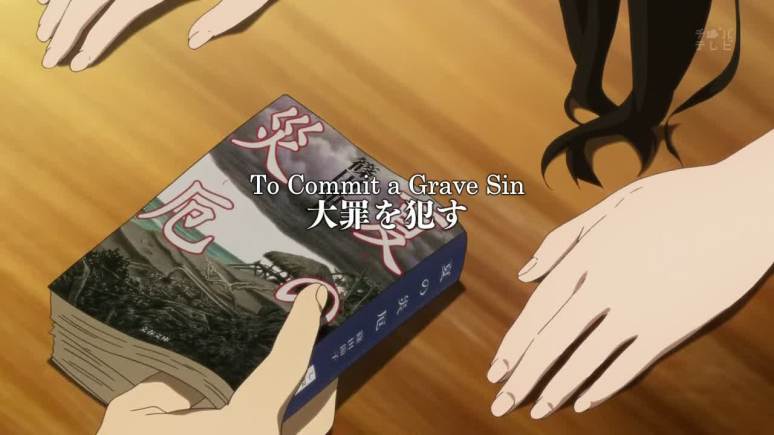 To Commit a Grave Sin (大罪を犯す taizai wo okasu) is the second short story in the fourth book of the Classics Club series (〈古典部〉シリーズ kotenbu shiriizu). That book consist of short stories that take place between the events of the other books. Also, the book on screen is Summer Disaster (natsu no saiyaku) by Shinoda Setsuko, published by Bunshun (篠田節子「夏の災厄」文春文庫, 1998). The book was a candidate for the Naoki prize, but it didn’t win in the end – she eventually got it for her Women’s Jihad (女たちのジハード) book back ’97. Summer Disaster is a “medicine panic” novel apparently, but I haven’t really looked into the details. Not that it matters – Houtarou was reading On Decadence in an earlier episode, and that didn’t have much to do with the plot in general either. Unless you consider how it’s focused on Japan losing the war a foreshadowing of Sekitani Jun’s story. I’d say that’s overthinking.