Too long for the time. “The hidden tragedy of the epic…” (I think the next line is too long as well in addition to having an unnecessary comma.) 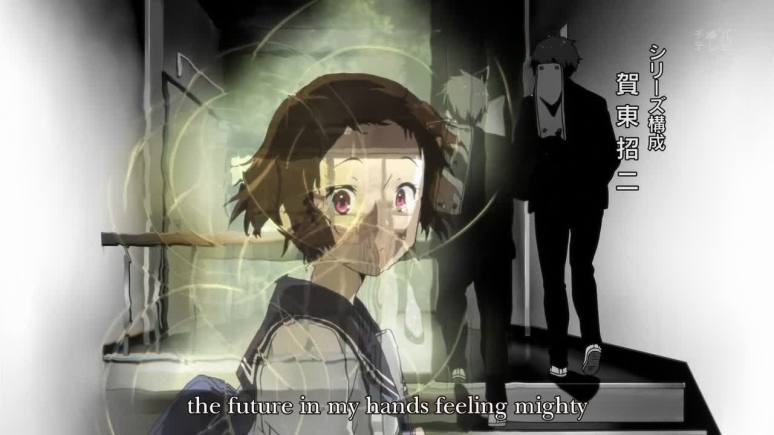 The opening song is always one of the most fun parts of the episode. (For example I don’t have to deal with a hundred lines of dialog in 1.5 minutes.) 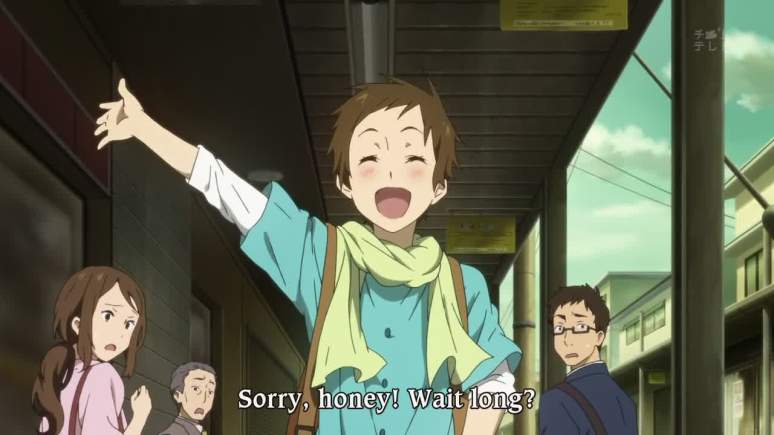 He’s always so gay and cheerful. 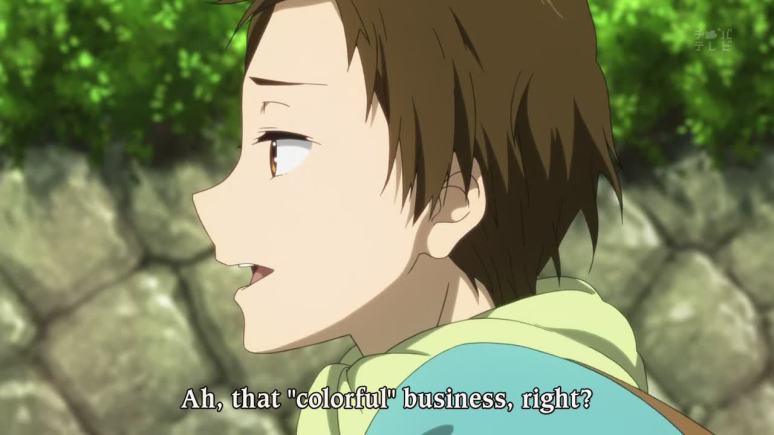 It feels as if a cloud suddenly blocked the sun. Why did he react so sad?

Since we don’t use the specific colors, this is what you get.

This whole dialog is really deep. Actually I bought the novels just the other day, and it all makes a lot more sense now. In the anime most of Houtarou’s thinking and inner monologues are missing, so especially during deep discussions like this, some lines hardly make any sense.

If we used the colors, this would have been a wonderful Lord of the Rings reference. 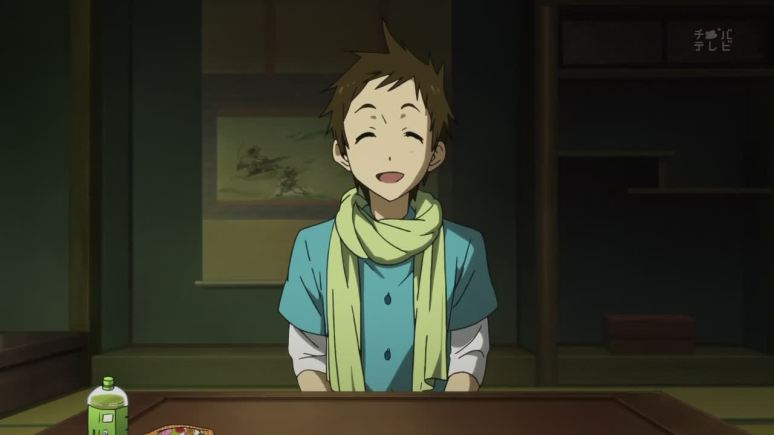 This one’s troublesome. In Japanese-style rooms, the wall farthest from the entrance is called 床の間 (toko no ma), and the seat at the table closest to that is the highest position among all seats (usually taken by the head of the family), the chief seat. Satoshi sat there, and Houtarou comments on how this position doesn’t fit him at all. 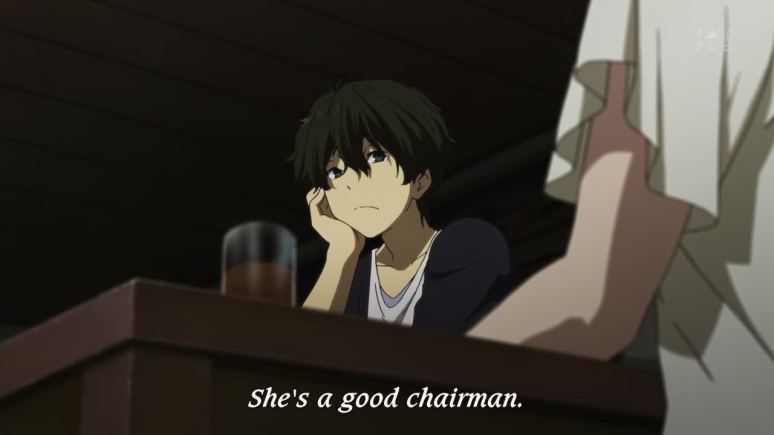 Her style of speaking in this scene is really formal, like a real chairman at a real meeting.

Now this is dirty play. I checked the last episode, and the part with “The culture fair was celebrated for five days as always.” was not read or shown in the previous episode when he read the introduction.

This is the character for “what”, a part of the word for “something”.

The 1960s were the age of the student movement in Japan as well. They protested against the pacts between Japan and America, the raise of tuition fees and other stuff as well. The guy’s helmet in the foreground reads “battle” (闘).

芒種  (boushu) is the ninth solar term, following the “full grain” one from last episode. 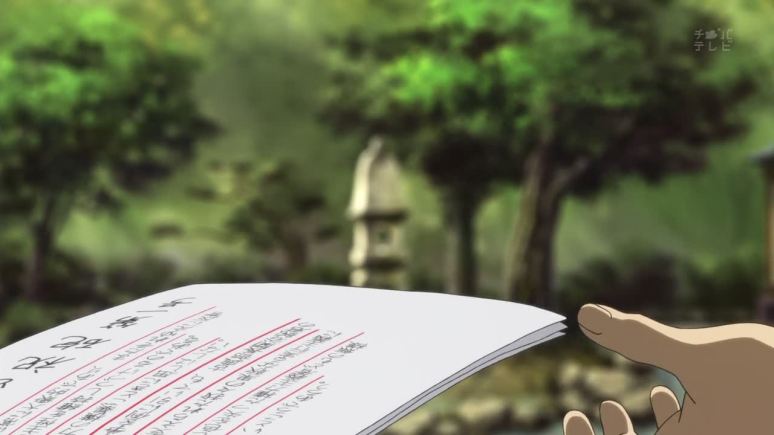 Therefore we are the masses, and as such we are anti-bureaucratic and independent. We would never yield to the aggression of the reactionaries. One needs only consider the class war of last June, when under the heroic leadership of the Classics Club’s president Sekitani Jun, our daring activism broke the ranks of the spineless authoritarians, and they fled in unsightly shame.

A true political flyer. Or rather high schoolers trying to copy what the adults do. I translated 実行主義 (jikkou-shugi) as “activism” for want of a better word. The point is that (in contrast to the bureaucrats) they actually do things, not just talk. 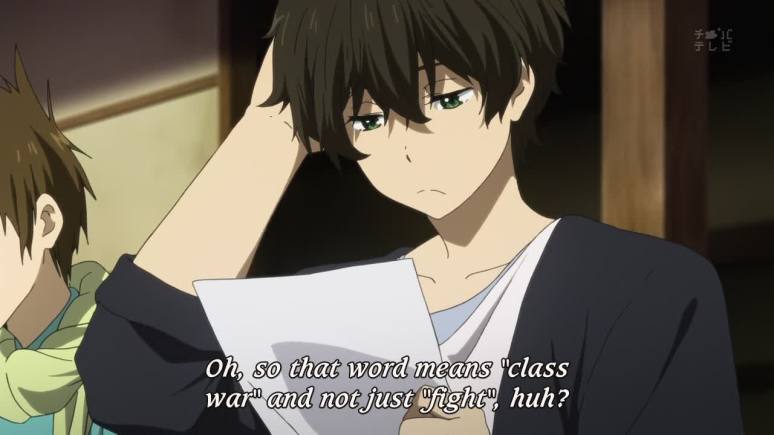 He comments on the word 斗争 (tousou). The 斗 (which the “to” from Hokuto no Ken, the Fist of the North Star) is usually read as a short “to”, but in this case it turns into the homophone for 闘 (tou). The word apparently isn’t really used outside of activist propaganda.

There’s nothing in her notes that she doesn’t actually say. 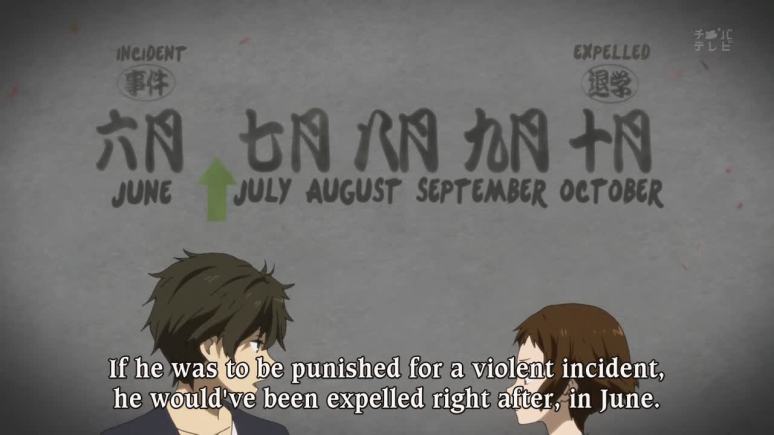 I’m a bit surprised that the typesetter stopped being Houtarou and actually did this.

A shoutout to all fansub reviewers! 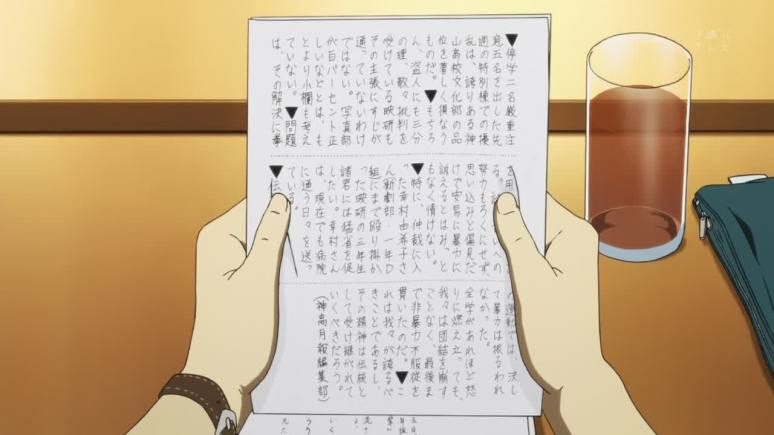 Two suspensions and five strict warnings regarding the disturbance in the auxiliary building last week have both negatively affected the name of the Culture Club.
But give the devil his due, of course the oft criticized Film Club have a point as well. No one claims that the Photography Club would be 100% right in the matter.
The problem is that to resolve it, they have reserved to violence. They showed no signs of a will for negotiations. It is terribly pathetic how easily they turned violent to protect their delusions and prejudice.
Especially the third-years of the Film Club, who went so far as to beat Sachimura Yukiko (New Drama Circle, 1/D class) when she tried to negotiate, should do some serious soul-searching. Sachimura still has to visit the hospital every now and then.
In the legendary movement from two years ago they would have never used violence. Even as the whole student body was aflame with anger, solidarity was the sanctity that held us together and we managed to carry out the non-violent civil disobedience.
We should be proud of this, and carry that spirit with us to the future in our legends. 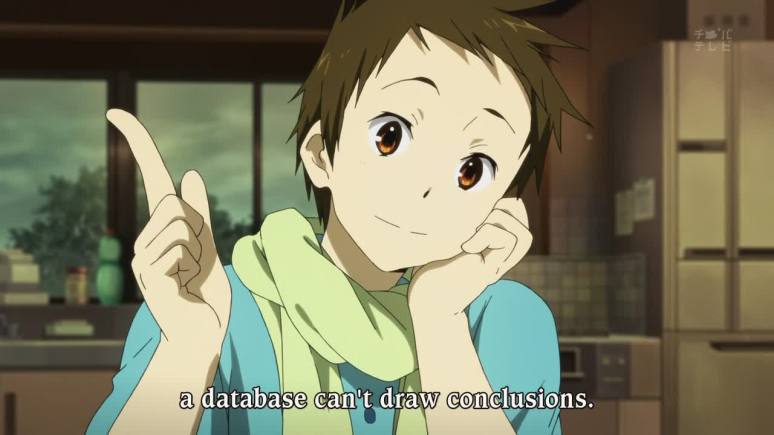 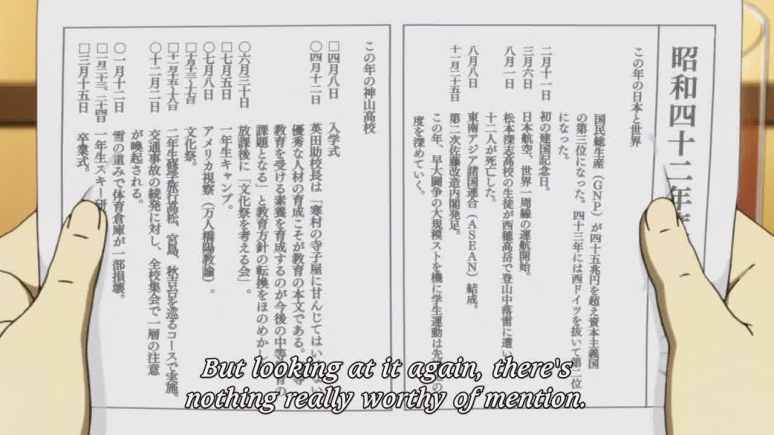 This was evil. Remember, in episode two I said the the only thing that may be relevant was the death of a student in a traffic accident, but that was actually a different page in the book. This page reads…

Japan and the world

The large-scale strikes of Waseda students have radicalized the student movement even further. 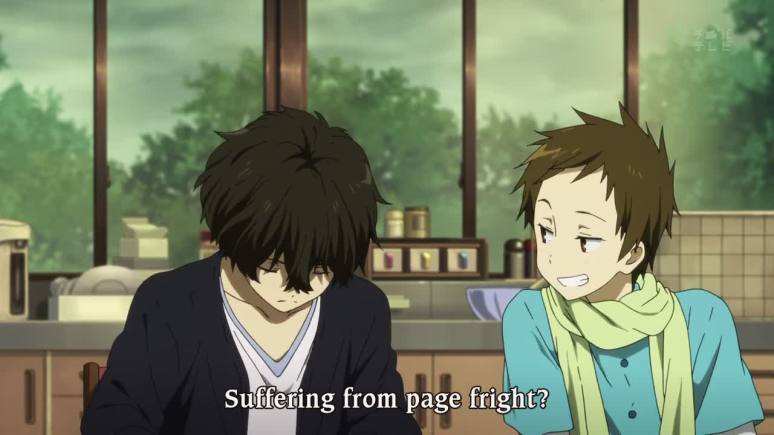 The newspaper headlines are “No signs of calm in the heated student movement” “Student council established in Kamiyama High School to discuss their demands” “Negotiations with the students failing” “Disturbances at the Kamiyama High School Culture Fair” “Student boycott continues” “Japanese man disappears in Bengal, India”.

That’s the yearbook of the school open at 1968. Their teacher is called Fukuyama. The newspaper’s headlines are “Looking back at 1967” and “New harmony in the school’s management”.

The text flying around is the titles of the sources and parts of their text. 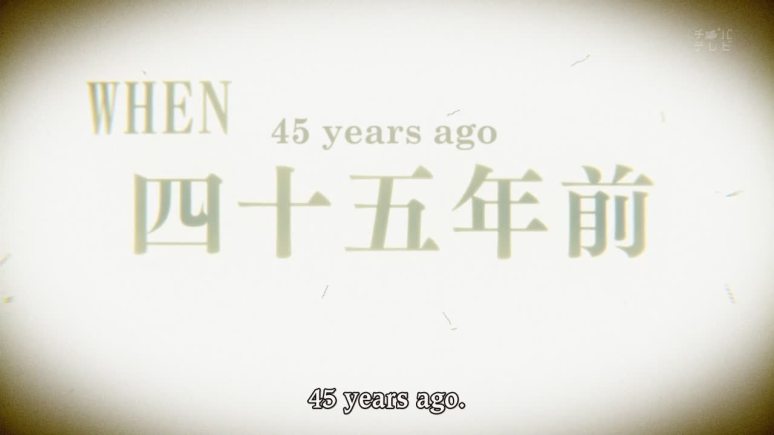 He follows the 5W1H of journalism. 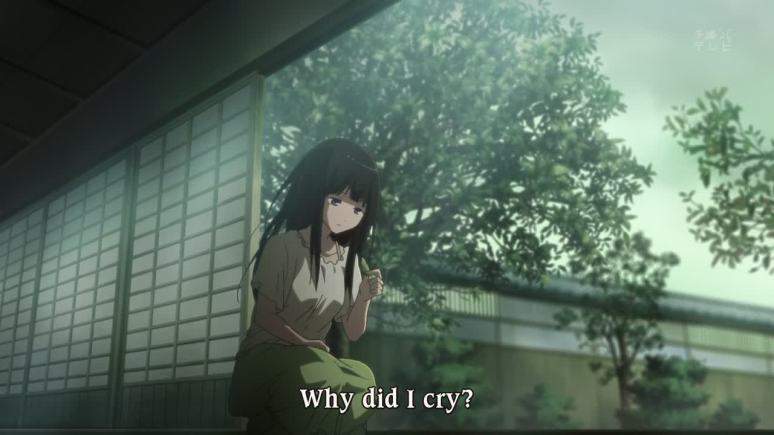 This is still far from over…