Some birdies told me this would be the next Ano Natsu. They better not be lying to me.

Honorifics present. Eastern/Spoken name order. No song translations, though, because CR is professional like that. 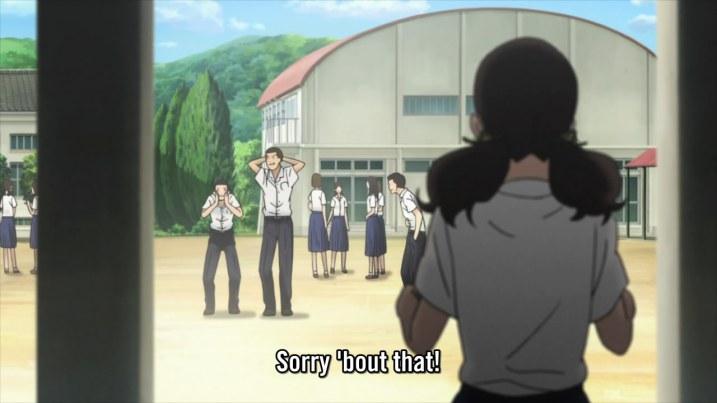 Interesting how the translator for Tsuritama completely ignores the accent, but the one for Kids on the Slope actually tries to include it. Four-eyes mentions how the students speak some Kyushu dialect he can’t understand. Sadly, it’s very difficult if not impossible to portray an actual dialect in subs because, like he said, dialects are often very different from the language they’re based on, so we have to settle for the little casual accent thingy here. 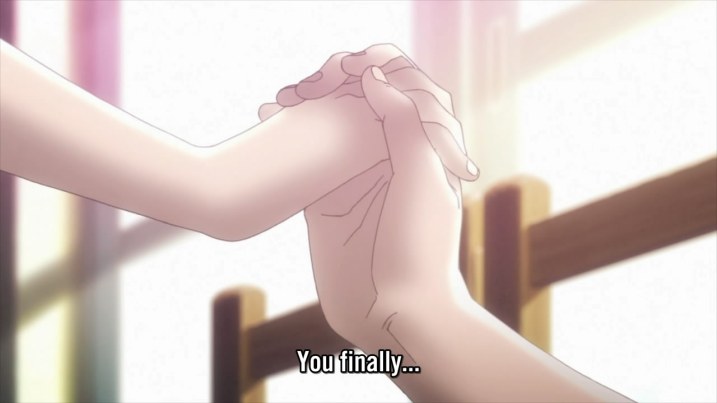 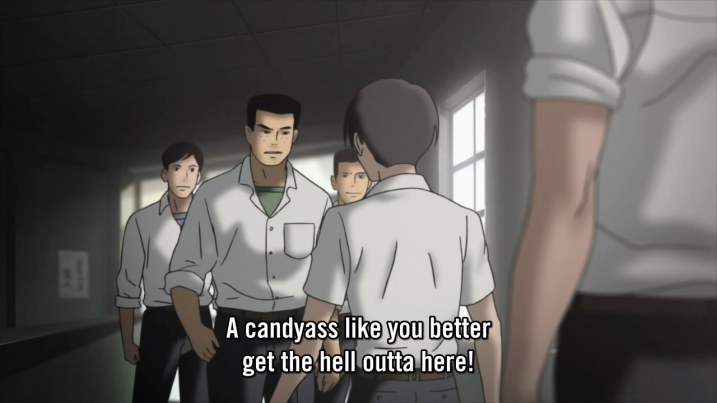 What a fitting way to refer to the omega-level MC. 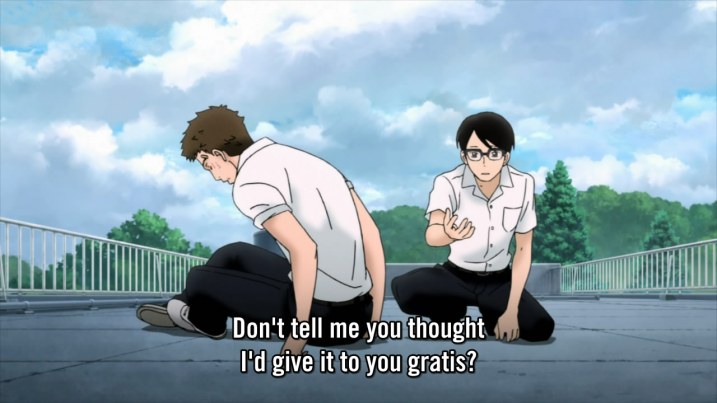 A macho man like him doesn’t seem like he’d say “gratis.” Or maybe he’s smarter than I give him credit for. Unless there’s an actual reason for him to say that, I’d keep it casual and low-key.

So far, the dialogue has been good. They’re polite when they have to be and let the accents loose when shit gets real – 1960s real.

Crunchyroll ruining my subs. I kid. That’s a pretty ingenious nickname for an otherwise lame Japanese pun. He’s rich, so his name’s “Richie.” Hah! So funny!

“I swear… / You two are nothing but trouble.”

“Cause me no end of trouble” is an awkward and terrible line, and “I swear” doesn’t lead into it at all. The next line does nothing to help either.

This quick exchange was handled pretty poorly by CR. The lines are too split up and poorly punctuated, which makes reading them a pain in the ass. This was the scene immediately before the one I’m showing you now. 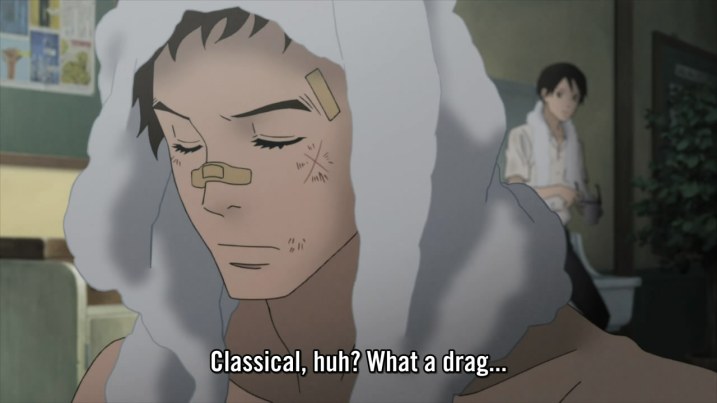 “What a drag” usually refers to something being a nuisance or a pain in the ass. Unless he’s referring to Nishimi, nothing else in the situation would have me believe the phrase was used correctly. I mean, you can read into the situation, argue some bullshit, and make “what a drag” fit, but it’d just be easier to use a phrase with zero conflict or confusion. It’s not even a major change, anyway.

Ah, the seeds of romance have been sown. This is the only episode I’ve seen so far, but I’m assuming this is the main couple. The girl looks pretty cute. If she’s interesting enough, maybe I can blog about it separately from my views like I did for best girl Ichika.

“How do you find time to play the piano as a sailor?”

This line really makes no sense. How is it amazing to be able to play the piano, “even though he’s also a sailor”? If he’s referencing the time commitment that being a sailor entails, then CR should’ve straight up said that. 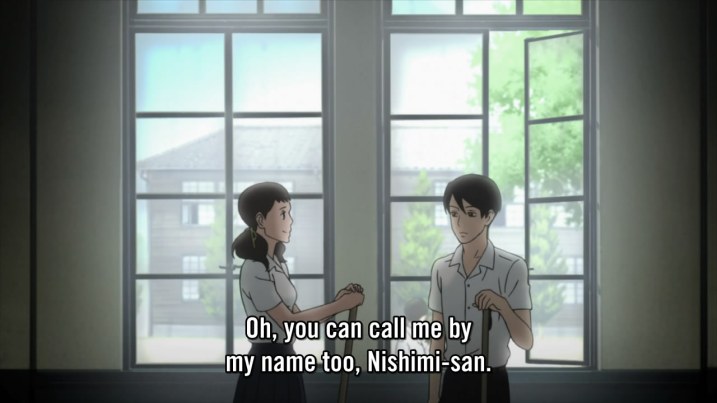 “Oh, you can call me by my first name too, Nishimi-san.”

I guess the viewer should know that calling someone by his/her first name is considered more casual as Nishimi observes from Ms. Pigtails and Mr. Stripes’ example, but it wouldn’t hurt to eliminate the ambiguity. He has been calling her by her name the whole, after all. It’s just been her last/family name. And with my change, it also subtly hints to a niwaka viewer that there is a distinction between calling people by their first and last names.

I had such high hopes for CR, but then they go and do shit like this.

Crunchyroll was off to such a strong start in the beginning with the dialogue and accent. Dialects are difficult if not impossible to accurately reflect in subtitles without knowing both Japanese and English extremely well. I sincerely doubt anyone is capable of doing so in the current anime scene, but at least CR tried with the accent and ultra-casual language.

+ Some good slang in there

Despite what some people (read: idiots) would have you believe, punctuation does affect flow. Crunchyroll has always had a problem with punctuation, and it doesn’t look like it’ll get better any time soon. Misplaced/missing commas, punctuation ending sentences early, improper use of ellipses, etc. can certainly affect how a line is read and interpreted. CR had cases where they negatively impacted the subs instead of facilitated smooth, free-flowing subs. They also had some awkward lines and less than ideal usage of some slang terms. A rip group should easily spot the problems and fix them up for some 5/5 action.

Also, if you couldn’t tell, I’ll no longer be focusing on punctuation errors or minor grammar problems. It takes too much effort, and no one really cares about that stuff anyway, though they’ll still be taken into account. For most the reviews, I’ll try to comment on relevant lines and provide commentary on the overall quality of the subs and whatnot. Major errors will still be documented.

Overall Grade: 3 stupid seniors on the roof… out of 5.

Tags: 3 out of 5, crunchyroll, fansub, horriblesubs, kids on the slope, prosub, review, sakamichi no apollon, script
This entry was posted by brainchild.