Came for the Shizuka Itou. Left because of the albino. 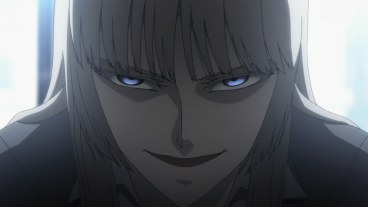 Albinos are not moe, unfortunately.

r/a/ge level: 80/100. My tastes and gg’s tastes aren’t exactly comparable, so I rarely watch their releases. This rating was determined by the general feeling I got from browsing /a/.

No honorifics. Western name order, which I guess is spoken name order in this anime. Romaji and English lyrics for the opening and ending themes. Commercials! 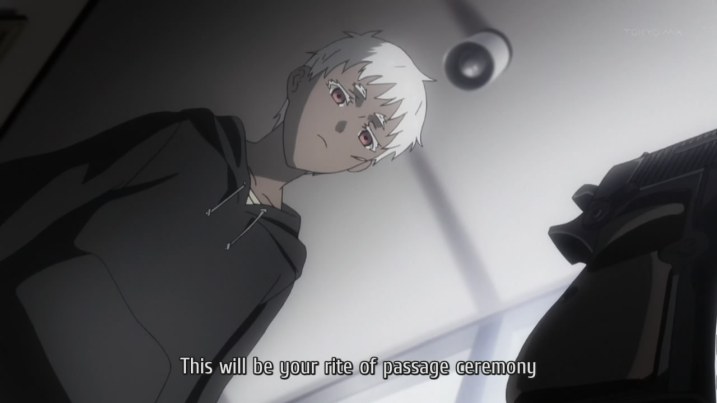 Ceremony is a little redundant because that’s what a rite of passage most commonly is, but whatever. Pretty minor. 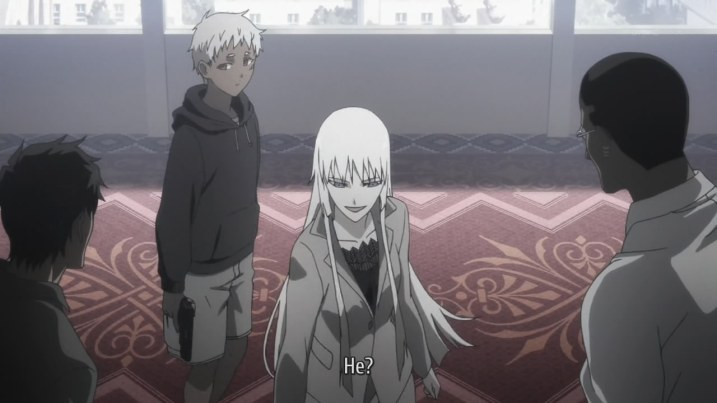 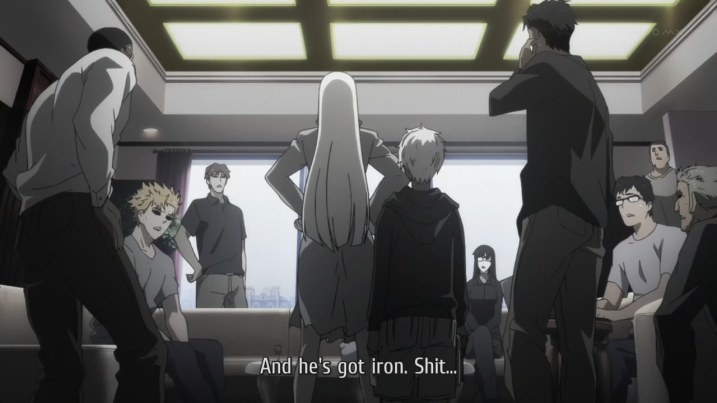 (Shooting) Iron is a valid regionalism for gun, but I haven’t heard many people use it.

“You” should be emphasized. 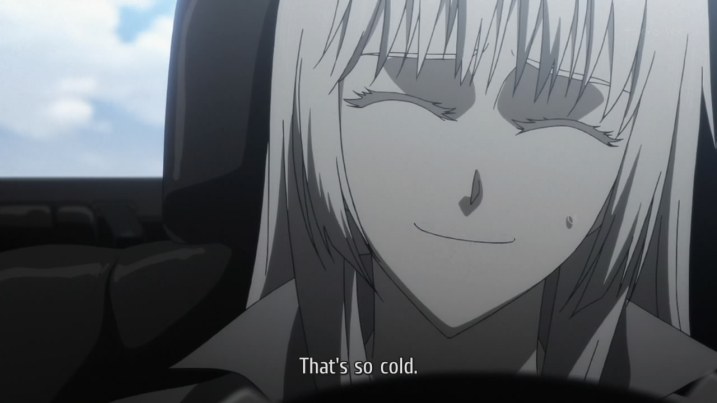 This line reminds me of GTA IV when you first meet Bruce, and he’s like, “You’re ice cold, Nicky! I love it!” I wish the line was “That’s ice cold,” but the original is fine as it is.

I love it. Every so often, gg just has the perfect line for a situation. 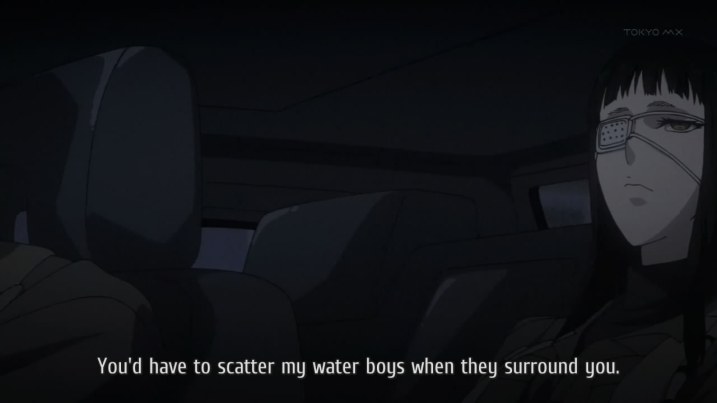 Apparently, water boys == lackeys, but I didn’t make the connection at first. When using “slang,” make sure they’re widely known (or real).

More like “Heads up!” or “Watch out!” (Whoops, forgot to upload this pic.) 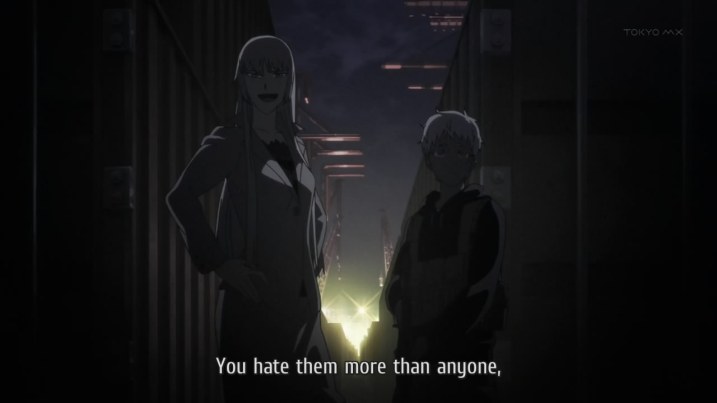 “I expect things’ll get ugly, so prepare for trouble.”

Once again, I have never heard this “idiom” used in this context, so I don’t even know what the line is supposed to mean. 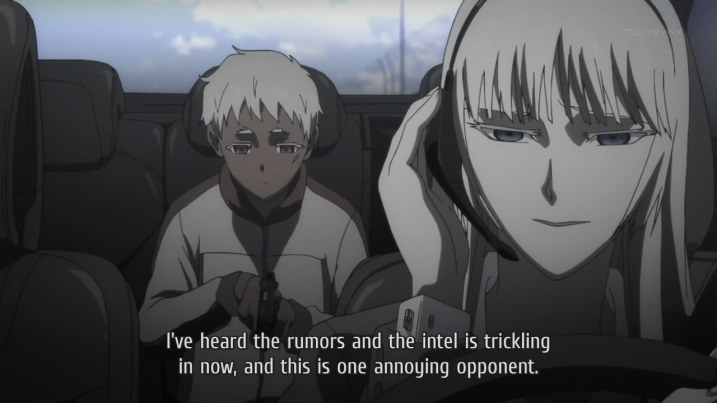 “From what I’ve heard and the recent intel, this guy means business.”

The original has a run-on sentence and is kind of awkward. 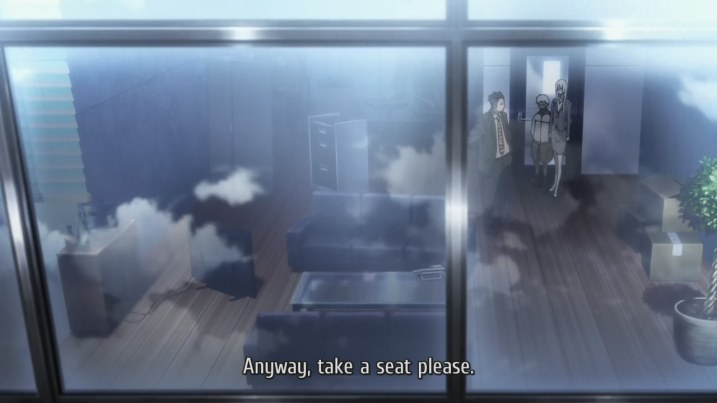 There should be a comma before “please.”

I’d prefer to change the line a bit: “But please, have a seat” or “Anyway, please have a seat.” (Cue Chris Hansen.)

Coke should be capitalized… if it is referring to Coca-Cola specifically. Otherwise, as a generic reference to soda, it doesn’t have to be. 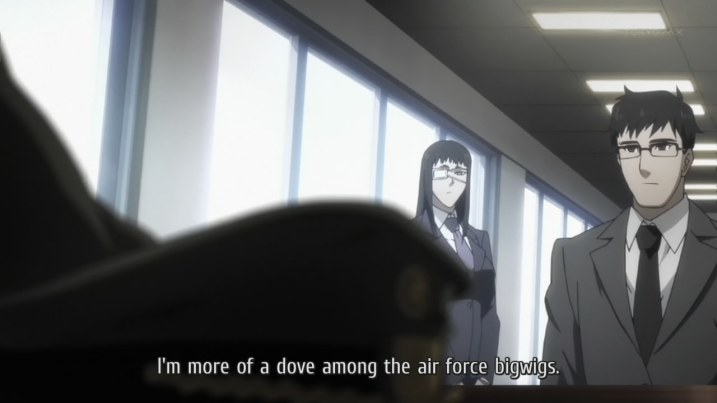 This is what I like. Subtle lines that just pack a huge punch of imagery and information. Yeah, I have a thing for metaphors.

“Today’s armies, countries, organizations, and families aren’t what you’re used to” or something like that.

Alas, as much as I want to give this release a higher score for some really good lines and mostly good dialogue, the technical mistakes and awkward phrases really piled up. It’s especially bad when a native English speaker can’t pick up on the regionalisms you use for English subtitles. I also try to give some groups the benefit of the doubt by looking up the phrases, but these were really out there.

– Technical problems with grammar and punctuation

Tags: 3 out of 5, fansub, gg, jormungand, review, script
This entry was posted by brainchild.