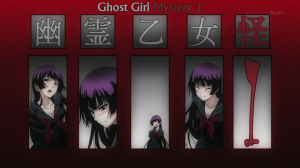 “Imagine” isn’t the right word here –  she’s not imagining things, she’s saying that she just probably forgot she put it over there or something. But I guess it works out in the end.

I’d rather put “…while I wasn’t looking.”

Change “to not” into “not to”. (Also nice typesetting.) This should be split or styled in some way to indicate which part is said aloud and what is just in her head.

This doesn’t make sense as a response to her thoughts. “That”? “His or her”? Come on, dear editor, put some more effort in that script. Time for my coming out: I checked the translation of this script. I very definitely remember changing “destroy” to “wander”. I have no idea what this is doing in the release. “Teiichi” should be “you”. This happens later as well. Stuff like this must be avoided. Instead of “as expected” I’d just add a “really” after “there”. Again I’m in a difficult situation. The translation is fine except for a few derps, but the editing is lacking at points. It flows much better than UTW-UW’s, but I can’t call it great.