Does it count as a bad omen that the first actual post I’m writing on this blog will unavoidably turn into an angry rant? I’ve been translating Symphogear since episode one, and although the simulcasts catch up this week, leaving me without a job, I’ll continue following the show just to see it through to the end.

I don’t know how much fun this anime is to watch with subtitles, nor am I going to rate any specific group’s subs for it (especially considering my undeniable bias). I just want you to understand why I consider Sympogear the trainwreck show of the season. But before that let’s just see what’s good about it. First, the animation. I’m not an encoder, even less an animator, but in the episodes I worked on there were no scenes that would be memorably bad art-wise. Then of course there is the music. Symphogear was marketed as a show focused heavily on music, and though that definitely isn’t the case, I wouldn’t call the music bad. Just don’t expect Macross grade composing (or focus on music). However…

And now let’s start with the rant. First, the audio. As Symphogear airs without closed captions, I can only rely on the audio for translating. And it’s not much of a help at all. The sound quality is horrible even in the raw video from the broadcast, and the (mis)balance  of dialog and background noise or music made it close to impossible to catch the words on more than one occasion. I wrote earlier that the music isn’t bad, and that’s true, however that doesn’t make it easier to translate. The transformation songs of the girls (because of course they have transformation songs) are in some language that I couldn’t identify, and on the net I’ve read various hypotheses about them being in Old Norse, Sanskrit and about half a dozen other ancient languages (though considering what went down in recent episodes, I’d say Sumerian will be the correct answer). As for the battle songs, at least they are clearly in Japanese, and I really have no right to complain about explosions and battle noises making them difficult to catch.

But even with the audio being as crappy as it is and some songs as undecipherable as they are, that’s not my biggest complain. There is one certain thing that manages to tick me off every single episode without exception, and that thing is the script itself. The writers of Symphogear clearly have no idea how people usually interact or talk, nor how to write anime at all. I don’t even know anymore what this show is trying to be. Before it started, it looked like just another Macross ripoff, then it slowly morphed into a mixture of Madoka, Panty & Stocking and Evangelion. In general there shouldn’t be any problem with having a contrasted story with half the episodes being gloomy or battle scenes and the other half being your usual high school girl slice-of-life with easy comedy, but in Symphogear it just doesn’t work out. One moment we are listening to a ridiculously long monologue from the show’s mad scientist, the next moment the very same scientist turns into Pedobear 2.0 Female Edition and starts sexually harassing the main heroine – which might as well be categorized as humor, but for some reason it’s simply not funny, it just feels terribly out of place. Hibiki (the aforementioned main heroine) is the main source of humor in the show, and the only one that managed to actually be funny every now and then. You could call it comic relief, but when the great majority of the show has a quite dark mood, it doesn’t work all that well. On the other hand, the names of Symphogear attacks are fascinating, or in certain cases outright hilarious. 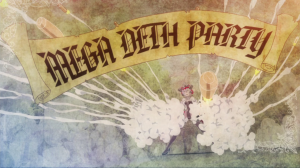 I did mention the ridiculously long monologues from the show’s mad scientist. I should rage a bit more about that. Let’s be clear: my problem is not when an anime has lines involving “science” that are meant to explain what’s going on in general, since that can be done quite well (even if it feels out of place, as in Madoka’s case). Even lines like those can be written well, so that they will be easy to understand and actually help people catch a drift of the events’ background. Not so in Symphogear. When the actual episode gets to the “serious discussion point”, the scene usually taking place in the control room of the Second Branch, the style of the script switches from a more-or-less usual anime-like style to the style of scientific journal articles. The only problem with this is that while scientific journal articles are written down, therefore even excessively long sentences are easier to understand, that doesn’t work in spoken language, in our case an anime. Symphogear is the only show, and these scenes are the only scenes where I need to first write down the Japanese for myself before I can actually start to translate it. Every time I head off to the Himado video of the episode to check out the comments of the Japanese viewers, and I always find it reassuring to see comments saying “what the fuck” “in Japanese, kthxbye” “the what of what?” “is that supposed to make sense?”  (in Japanese of course). If you’re watching the show with subs, you probably don’t realize this, because we split the sentences to make it easier to understand, but the original definitely isn’t something that anyone could understand at one listen, and that means that the scriptwriters fail big time.

My face when Ryoko starts blogging

My face when she goes on for five minutes

Another thing of significance in the show is the mythology. Some of the relics appearing throughout the anime are named after real mythological objects, such as the spear of Odin (Hibiki’s Gungnir), the sword that Susano’o used to slay Orochi (Tsubasa’s Ame-no-Habakiri) or an ancient Jewish snake idol (the Nehushtan armor), while in some cases I don’t even know if the writers managed to find some insanely obscure resources about ancient mythology or they just made things up, as in the case of Ichii-bal, which according to some is the name of the Norse god Ullr’s bow, or the armor called something along the lines of Kadingil, which seems to be somehow related to the Sumerian god Marduk, but I simply couldn’t find a single English reference to anything even similar. The shaft down to the Second Branch is something quite impressive, but I’m sure it has some hind meanings as well (I wouldn’t be surprised if it would be something related to the Sephirotic tree of the Kabbalah, since that “mythology” is surprisingly missing so far), and I’m even more certain that they’ll find some obscure name and origin for it. 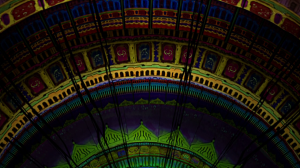 No head tilts though

I wish the writers would at least stick to one mythology instead of grabbing random mythical items from all around the world… But of course they won’t, and they won’t even stick to your “usual” mythology either. They make up the science behind the Noise and the Symphogear, then they throw in random Sumerian phrases that pretty much only appear in context of the pseudoscience of Däniken and the like, all this spiced with Japanese phrases that haven’t been used for about two hundred years… The mad scientist was right, this week’s episode, the first one actually simulcasted will be like a release from the past for me. This lulu amel will be the master of his Friday nights again. (Though I can’t say I’m not even a bit vexed that I suffered through half of the series, then they decide to take it away from me, I’m definitely not masochistic enough to keep translating it with “official” subs around.)

Tags: symphogear
This entry was posted by Vale.

2 thoughts on “Senki Zesshou Symphogear – (no) TL notes, (or) Observations”